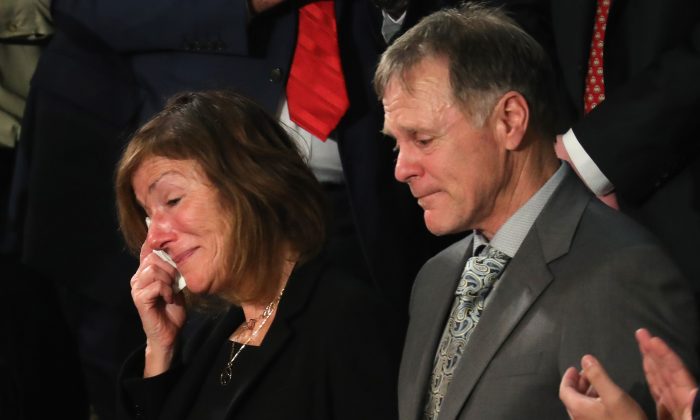 The parents of Otto Warmbier, Fred and Cindy Warmbier, are acknowledged during the State of the Union address in the chamber of the U.S. House of Representatives on Jan. 30, 2018. (Chip Somodevilla/Getty Images)
US News

The parents of Otto Warmbier, a U.S. college student who died after a year of apparently harsh treatment in North Korea’s brutal penal system, have asked the courts to liquidate one of the regime’s cargo ships that the United States seized in May.

Warmbier was studying at the University of Virginia and was visiting North Korea in January 2016, when authorities in the communist country accused him of stealing a propaganda poster from a hotel.

A North Korean court sentenced Warmbier to 15 years in prison in March 2016 for the alleged theft.

The Trump administration negotiated his release, but when he was returned to the United States in June 2017, he was in a vegetative state, described as “blind, deaf, and brain dead.” Medical experts said he experienced a “severe neurological injury” and had been comatose for about a year.

His jailers claimed Warmbier came down with a case of botulism, but U.S. medical doctors disputed that diagnosis. Six days after he was returned to the United States, his parents had his feeding tube removed and he died, at age 22.

The parents, Fred and Cindy Warmbier, have asked for the ship—the Wise Honest—to be sold and the proceeds applied to the $501 million judgment the family won against the totalitarian Democratic People’s Republic of Korea, the last Stalinist outpost on earth.

U.S. District Judge Beryl Howell determined in 2018 that North Korea “more likely than not barbarically tortured Otto to extract a false confession” and used his long prison sentence as leverage in diplomatic negotiations.

“The Warmbiers are committed to holding North Korea accountable for the death of their son Otto, and will work tirelessly to seize North Korean assets wherever they may be found,” Ben Hatch, an attorney for the family, told the New York Post.

The seizure was reportedly the first time the United States has grabbed a DPRK cargo vessel for violations of international sanctions. The ship was used to move North Korean coal and to import heavy machinery. Built in 1989, the Wise Honest is reportedly about 580 feet long.

Assistant Attorney General John C. Demers, who runs the U.S. Department of Justice’s national security division, previously said the vessel was the second-largest cargo ship in the so-called Hermit Kingdom’s fleet. The North Korean government demanded in May the ship be returned, describing its seizure as a “flagrant act of robbery” that ran contrary to the spirit of the U.S.-North Korea summit conducted by President Donald Trump and North Korean strongman Kim Jong Un in Singapore in 2018, PJMedia reported.

The country’s external affairs ministry said, “The United States must mull over what repercussions its gangster-like act will entail, and must return our vessel without delay.”

Warmbier’s parents sued in April 2018, claiming the DPRK was liable for their son’s “extrajudicial killing.” A federal judge ruled in their favor, awarding a half-billion dollars in damages.

Legal experts such as professor Jim Feinerman of Georgetown Law School claimed the judgment probably just a moral, symbolic victory because “the award will be difficult if not impossible to enforce.”

Trump has been engaged in diplomatic overtures with North Korea, making an impromptu visit a week ago to the DMZ demarcation line dividing the two Koreas, which have technically been in a state of war since the 1950s.

Cindy Warmbier criticized Trump’s efforts, calling them a “charade.” She said that “unless we keep the pressure on North Korea, they are not going to change, and I am very afraid they are going to let up on this pressure.”

The president has said that he considers “North Korea responsible for Otto Warmbier’s mistreatment and death.”

“I’m in such a horrible position because, in one way, I have to negotiate and the way I love Mr. and Mrs. Warmbier and I love Otto and it’s a very delicate balance,” the president said earlier this year.