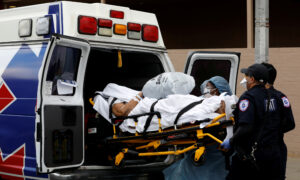 Otto Petersen, the comedian of “Otto & George” fame, has died, according to reports. He was 53.

Opie and Anthony made the announcement on their SirusXM show on Monday.

The show also tweeted about his death. “Our friend, Otto Petersen. God bless you,” the account said.

No details have been released on Petersen’s death, but he was a longtime guest of the show.

On Twitter, a number of people tweeted “RIP” and offered condolences.

Added another, “Love the way you guys pay tribute. So very sorry to hear about Otto.
#RIPOtto.”

“I was never sick before. It just came out of nowhere,” Petersen said last fall, according to The Comic’s Comic. “People die from what I had. But fuck it! I got lucky. But I don’t see a new world. I didn’t gain that wisdom from a brush with death. It’s just — I feel like I’m going to go through this again, and it’ll fucking do me in next time. I’ll live to die another day. Like cynical about it.”

The Interrobang said that Petersen, a contributor, will be missed.

“Rest peacefully Otto, you were an outstanding  comedian, an excellent writer, a comedy historian on many levels, and so much more.  You are already missed,” the website said.

It added: “Petersen had been a long time friend and frequent guest of the show.  No details have been released yet but we join everyone in the comedy community mourning this sad and sudden loss. Otto was an outstanding comedian, and on a personal note, he was becoming a regular contributor to the interrobang.  Earlier this year he reached out to us asking to write stories for us, and submitted two  this year.”