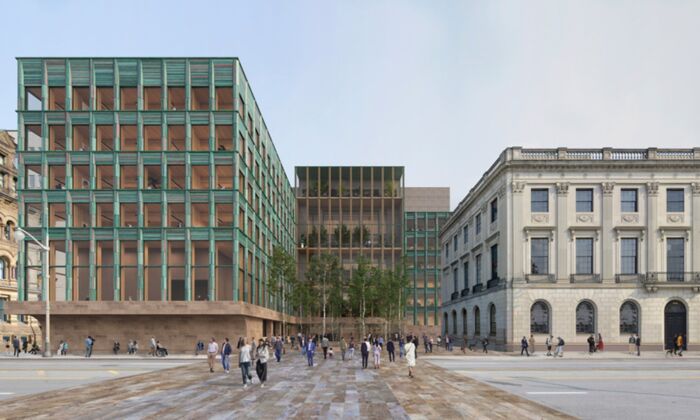 Filomena Tassi, minister of Public Services and Procurement, announced that Zeidler Architecture Inc. (Toronto, Canada), in association with David Chipperfield Architects (London, United Kingdom), was selected as the winning team in the Architectural Design Competition for the redevelopment of Block 2, as seen in this artist rendering handout image received May 16, 2022. (The Canadian Press/HO-Government of Canada)
Canada

The Terry Fox statue across from Parliament Hill will need to be moved to make way for a new building to house MPs and senators, committee rooms and an Indigenous Peoples’ space.

The planned building, which is rectangular with a nod to neo-classical design, has distinctive copper window facades, a reference to the copper roofs on existing parliamentary buildings.

Public Services and Procurement Minister Filomena Tassi says it will cost an estimated $430 million to transform a mix of aging buildings facing the Hill into a modern, inclusive and sustainable design.

Toronto firm Zeidler Architecture and David Chipperfield Architects of Britain won the design competition to develop the space, known as Block 2, which will complete Parliament Square.

The statue of Fox, who ran across Canada to raise money for cancer research, is to be moved to another prominent position before building starts in 18 months to two years.