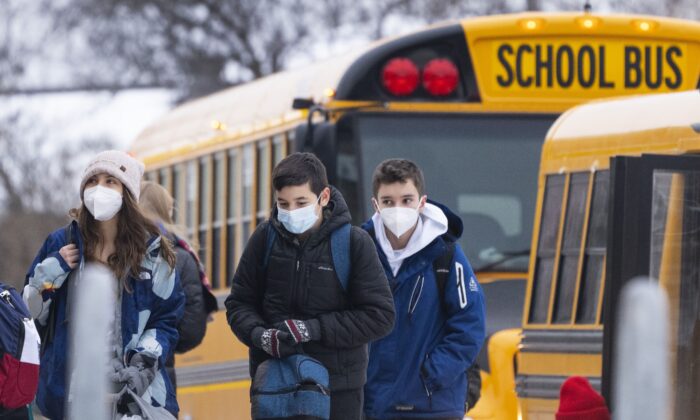 School board needs to clarify to parents what legal authority it has for imposing such mandate, legal expert says
By Isaac Teo

Ottawa’s largest school board says masks are now mandatory for students, staff, and visitors in all schools and buildings.

In an email Wednesday, the Ottawa-Carleton District School Board (OCDSB) told parents that its board of trustees has passed a motion Tuesday evening, requiring all staff, students from kindergarten to Grade 12, volunteers, and visitors to wear a mask inside schools and buildings with immediate effect.

The move by OCDSB defies the stance of the Ontario government, which lifted mask mandates in most public settings including schools across the province on March 21.

Camille Williams-Taylor, director of education at OCDSB, said the reason for doing so is due to the rising COVID-19 cases in the community.

“This impacts the health of students and staff and also has contributed to an increase in the number of temporary class closures due to staff shortages,” she said in the email, while also citing a statement from Ottawa Public Health on April 11, saying it is “supportive of measures that can be taken to increase mask use.”

Eight trustees with the OCDSB voted in favour of the motion brought forward by trustee Mark Fisher of River/Gloucester-Southgate on April 12 after nearly two hours of procedural wrangling. Three others abstained and one opposed.

Williams-Taylor said the school board is expecting non-compliance from some students.

“Where a student without an exemption refuses to comply with the masking requirements, staff are asked to show understanding, promote awareness, and use trauma-informed practices in order to make efforts to understand the reason for the lack of compliance and see if a resolution can be reached,” she wrote.

Exemptions include breathing difficulties, cognitive conditions, and religious grounds, which must be approved by the school principal, the email stated.

Should a student continue not to wear a mask, said schools are authorized to implement further measures, the email said.

The board stressed that students will not be suspended or expelled for refusing to wear a mask.

Williams-Taylor said the order is legal, even though the provincial or local health authority had not requested mandatory masking.

“The school district has the legal authority to require the wearing of masks for health and safety reasons,” she said.

Ryan O’Connor, a Toronto-based litigator who advises clients on matters involving federal and provincial legislation, has a different take.

“Interestingly, that’s not even what the Ottawa School Board’s resolution stated—trustees directed staff to draft a policy,” he said in a tweet on April 13.

“The @OCDSB needs to immediately clarify for parents under what purported legal authority it has imposed a mask mandate.”

“This is a rule of law issue,” he added.

Williams-Taylor’s email also addressed concerns of parents who may not want their child to be in class with unmasked students.

“The requirement for mask wearing is mandatory,” the email said. “We anticipate that the majority of students will comply. However, we respect that some families may seek an accommodation/exemption. It’s important that everyone respects the rights and choices of others.”

Criminal lawyer David Anber took to Twitter to say that the school district has no way of “forcing” students to wear masks against their will.

“As suspected (and this is not legal advice) they don’t seem to have any way of forcing a student to wear the mask if they (and the parents) defy the mandate,” he wrote.

In an interview with CTV News on April 13, board chair Lynn Scott, who abstained from the vote due to not having the chance to explain her rationale before the vote was called, said she would have voted against it.

“The reason for that, quite simply, was the issue of how do you enforce it, and how much additional protection would such a mandate really provide?” she said.

She added that even when the provincial mask mandate was in force, schools in her district “certainly did not see 100 percent mask use.”

“Certainly you can ask students to wear masks. You can talk about the perceived benefits of masks. But ultimately, I don’t believe that we can send children home because they’re not wearing masks,” she said.

Scott said parents have reached out to her expressing their concerns about the newly imposed mask mandate by the board.

“They are vaccinated, they are mostly wearing masks, but what they really feel is it should be at this stage a matter of parental choice, of family choice,” she said.

Before the vote on April 12, Fisher said, as a concerned parent himself, it is vital that the board do their part to reduce the risk of COVID-19 transmission.

“I’m concerned as a trustee. We cannot pick and choose when safety is important,” he said, defending his motion.

Barrhaven/Knoxdale-Merivale trustee Donna Blackburn, the only one who voted against the motion, said it is not possible to enforce a mask mandate.

“There will be people in our schools tomorrow just like they were today and that will continue throughout,” she said before the vote.

“I refuse to give people a false sense of security.”

Meanwhile, the Toronto District School Board has said although it takes its direction from the provincial government, it will ask all staff and students to wear a well-fitting mask when indoors in schools, though not mandatory.

Earlier this week, Dr. Kieran Moore, Ontario’s chief medical officer of health, said the province would not be reinstating “a broad mask mandate” at this time, but recommended masks be worn in indoor public spaces.