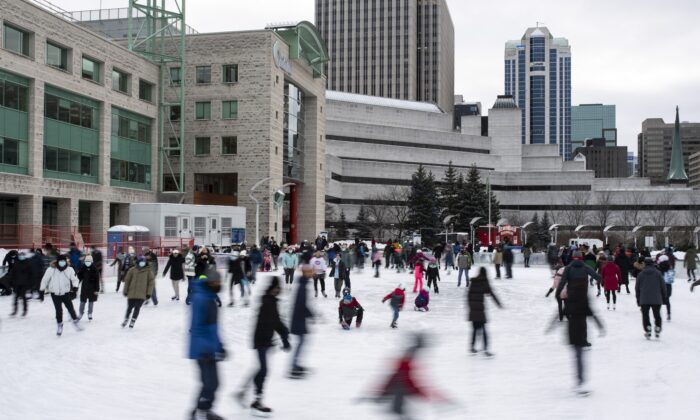 People ice skate on the Rink of Dreams at City Hall in Ottawa on Dec. 28, 2021. (The Canadian Press/Justin Tang)
Viewpoints

City of Ottawa politicians have done us all a great favour with their climate change plan. It is not that, at 0.014 percent of world emissions, anything Ottawa does will make any difference to world climate, of course. It is that, by enabling a plan forecast to cost over $57 billion, Ottawa has set itself up to be a cautionary tale of what inevitably happens when fiscal policy and hard-nosed science and engineering are subordinated to ideology and special-interest pressure politics.

For that is exactly what Ottawa’s leaders have done. To appease loud, uninformed activists, the city has brought in a hopelessly naive strategy that is impossible to successfully implement but will cause great financial pain to residents and businesses of the region for no environmental benefit.

As if that wasn’t bad enough, the City of Ottawa’s climate policies will contribute to a growing ecological and humanitarian disaster—the abhorrent work conditions and pollution in countries where the raw materials for “green” energy components are sourced.

The genesis of the city’s climate change plans was local flooding in spring 2019 and a series of tornadoes that struck the region the year before. Those had nothing to do with climate change, of course. The floods were caused by poor management of the annual run-off of melting snow, and as has been explained by former Environment Canada research scientist Dr. Madhav Khandekar, now a science advisory panel member with International Climate Science Coalition – Canada, the tornadoes were caused by natural meteorological conditions.

Yet, as a result of these events and pressure from climate campaigners, local politicians saw fit to officially declare a “climate emergency” and direct city staff to develop a plan in response. The result is the Climate Change Master Plan and its equally misguided sister document, Energy Evolution.

As a result of these plans, the City of Ottawa now intends to force a radical transition in how Ottawans move about, heat their homes and businesses, generate electricity, the products they use, and so on, all in the name of stopping climate change. That Ottawa, the seventh coldest national capital city in the world, now has a mayor and city council fixated on stopping warming when cold weather kills 20 times as many people across the world as hot weather, doesn’t seem to faze them.

It will certainly faze local residents however when they come to appreciate the gargantuan scale of the city’s “net-zero by 2050” plans: 36 square kilometres of rooftop solar panels, 710 industrial wind turbines each taller than the Peace Tower on Parliament Hill, and 122 large shipping containers of lithium batteries for power storage. No one knows where all this will be disposed of when it wears out. You can’t just dump “green” energy waste into landfills unless you want a toxic pollution nightmare, as chemicals and other substances like lead leach out as they break down.

And who in their right mind wants to live close to a 50-storey industrial wind turbine? The Australian anti-wind power group, Stop These Things, sums up the situation well:

“Unless you’re living with it, you’ll have no idea what it’s like to suffer incessant wind turbine generated low-frequency noise and infrasound. A trail of abandoned homes wherever these things operate is testament to the fact that the noise is insufferable.”

The millions of birds and bats massacred by wind turbines is well known to most people. What is less appreciated is the environmental destruction and human rights abuses caused by the mining and manufacturing required to produce renewable energy machines. For example, when mining rare earth metals needed for “green” energy, about 90 percent of what is pulled up from the ground contains uranium, thorium and other radioactive nuclides. This radioactive waste can pose serious risks if it is not properly disposed of. In China’s Heilongjiang province, a carpet of toxic dust covers agricultural regions. And, of course, China controls most of the lithium and cobalt used in renewable power, which is often produced with child labour and near-slave labour, with practically no health, safety, or environmental safeguards.

And for what? Intermittent wind and solar power that result in blackouts when the wind dies or the sun goes behind the clouds? A secure and prosperous city is impossible with a weak electrical grid, and Ottawa’s grid would be the weakest imaginable if its Climate Change Master Plan is ever enabled.

When temperatures plummeted and wind and solar power failed in Texas last February, the state suffered US$200 billion in damage and an estimated 250-700 people dead. If this happened in Ottawa in the depths of a -30°C cold spell, it would be far worse. And transportation would come to a standstill since the city plans to force all buses and personal vehicles to run on battery power—provided by wind and solar power, of course.

The city’s overarching vision is to transition “Ottawa to a clean, renewable and resilient city by 2050,” but instead, local residents will find themselves living in a polluted, fragile, and bankrupt city suffering from regular blackouts and business failures.

At least it will serve as an example no other government should follow.