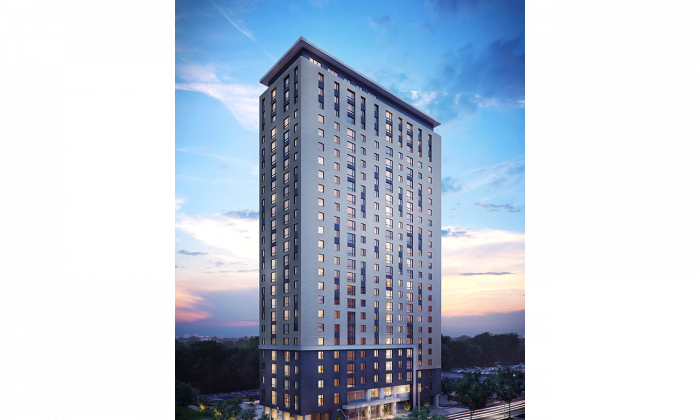 Ottawa’s Ashcroft Homes is playing an integral role in the changing complexion of the growing capital city, satisfying the needs of its burgeoning student population while also attracting investor attention.

David Choo, Ashcroft’s founder, owner and CEO, says Carleton is experiencing a 24,000-bed shortfall, and Envie—opening in time for the 2016 school year—will offer some relief.

The second phase is a condominium being touted as a slick investment opportunity with high appreciation potential, because it’s unlikely that university enrollment will drop any time soon. The success of the two buildings, together providing around 512 units and roughly 1,000 bedrooms, will go a long way toward determining how many more builders tap into the student market.

“There’s no question there’s a trend now to build more modern buildings for student accommodation,” said Choo. “Landlords convert old houses into apartments and market them to students, and it’s creating demand for better product, a little higher-end product, that’s sort of like a boutique hotel for students.”

Capital Hall and Envie, located next to Carling Station, are one O-Train stop away from Carleton University. Choo says that makes the development instrumental in servicing the university’s student residence shortage because the average commute time for Carleton students is 25 minutes. Given that’s a median number, “Maybe some take 10 minutes, others take an hour,” commuting to school, said Choo.

“The two buildings are complimentary, not competing, and together they cover a wide range of student needs for housing. They’re two buildings with a campus-like setting with outdoor amenities.”

While students are typically pennywise, living in condominiums, as opposed to shabby rental apartments, isn’t as far-fetched as it seems. Choo said Carleton’s seen a 43 per cent increase in foreign students, and many are from affluent families in large Asian cities.

“The Chinese students make up the biggest cohort, then the South Asians make up the second,” he said. “What we’re seeing is that there’s variety in foreign student attendance at the university. In part, it’s because it’s the capital of the country. What better place to pick than the capital?”

Choo expects parents to purchase units their children can live in while attending Carleton, but they have the options of either selling the units after at a profit or renting them out. While most investors are Canadian, many are also Chinese.

“Here you don’t have capital depreciation because student residences will always be in demand. Student condos are needs-driven. There’s a broader market for condos,” he says.

Envie and Capital Hall are situated near Preston St., home to Little Italy and Chinatown to the north. The street has seen an amelioration of entertainment amenities in recent years, in part, says Choo, because of the student population and its loftier tastes.

Ottawa’s LRT, expected to be completed in 2018—the same year Capital Hall readies for occupancy—is the biggest telltale sign that Ottawa is growing from a sleepy city to a burgeoning urban centre.

It won’t take long for Ottawa’s population to hit 2 million, and as a result, high-rises are sprouting up like never before. The cost of land in Ottawa, while increasing, is nowhere near as high as it is in Toronto, but the city is beginning to lock down boundaries in an effort to contain the building, which will undoubtedly have a skyward effect on price.

“The cost of building high-rise and buying high-rise is going to be higher,” said Choo. “We’re lagging (Toronto) in that regard because land is not as expensive here as it is there. We’re where Toronto was 15 years ago, but I think we’ll urbanize at a faster rate.”

Ashcroft has already built 25 condominium projects in Ottawa, in addition to many subdivisions, but its latest crown jewel is re Residences near Parliament Hill. It will be built on an historic site and offer residents breathtaking views of Parliament.

“The re is iconic in the sense that there will be virtually no other residential offer for sure in North America and maybe the world whereby you can buy a private residence that close to parliament with an unobstructed view of Parliament,” said Manny Difilippo, CFO of Ashcroft Group.

“There will be no other buildings in front of you after the fifth floor, so you get an unobstructed view of Parliament.”

Alavida Lifestyles, another Ashcroft subsidiary, has keyed in on the aging population, and its approach is anything but piecemeal. It runs two seniors’ homes called Senior Suites, an activity-driven residence for independent seniors. Unlike run-of-the-mill seniors’ homes, Senior Suites offers residents luxury units in an exceptionally opulent and capacious building.

When residents begin losing autonomy, they’re transferred to one of three Alavida-operated Retirement Residences, where they’ll age-in-place with around the clock medical care.

Said Difilippo, “As they age in place and require more servicing, they simply move from one building to the other that provides greater services.”