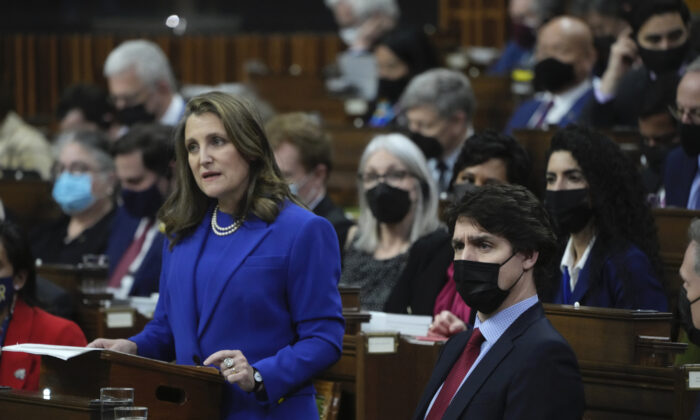 Finance Minister Chrystia Freeland tables the federal budget in the House of Commons as Prime Minister Justin Trudeau looks on, in Ottawa on April 7, 2022. (The Canadian Press/Adrian Wyld)
Canada

It will take the federal government at least 20 years to balance the budget, judging by its current state and only if granted a generous forecast, says the Canadian Taxpayers Foundation (CTF).

The CTF report’s comparisons show that the country’s revenue and spending would become even by 2041, but that it would take until 2061 to pay down the national debt.

Another condition is that Canada’s average annual interest rate must remain at or below 2.5 percent, which is “lower than interest rates were any year between 1991 and 2015,” the release said.

However, the CTF report noted that “the average annual effective interest rate between now and 2061 is about 2.7 per cent.” It added that the PBO was assuming 1.7 percent as the current effective rate charged on the government’s debt, when “the Bank of Canada [on July 14] just issued the largest one-time interest rate hike since August 1998, putting Canada’s benchmark borrowing rate at 2.5 percent.”

It will also take longer to balance the budget if the federal government introduces any new spending initiatives in the future beyond what’s included in Budget 2022, the release added.

The CTF report comes less than a week after Giroux published his report saying Canada’s current fiscal policy is sustainable over the long term if it continues on its current trajectory.

“Current fiscal policy at the federal level is sustainable over the long term,” said the news release announcing the PBO report. “We estimate that the federal government could permanently increase spending or reduce taxes by 1.8 percent of GDP ($45 billion in current dollars, growing in line with GDP thereafter) while maintaining fiscal sustainability.”

Giroux told The Epoch Times that his report was not meant to be a prediction of what will necessarily happen in the future, but what would happen if fiscal policy remained the same.

“The report was not a forecast of what will happen. Rather, it’s an indication as to what would happen in the absence of any change over the next 75 years,” said Giroux. “And we know full well that there will be changes. That’s, in fact, why governments get elected. They get elected to implement changes.”

‘Another Two Decades Is Too Long’

This year’s CTF forecast that Canada’s budge will be balanced by 2041 is a 29-year improvement over last year’s prediction. Last year, based on supplementary data from the PBO’s Fiscal Sustainability Report 2021, the CTF forecast that it would take the feds until 2070 to balance the budget.

“But taking another two decades to balance the budget is too long, and even that target won’t be met if interest rates tick up, the economy doesn’t grow every single year, or politicians can’t find the willpower to say ‘no’ to new spending,” CTF federal director Franco Terrazzano said in the release.

“By the time the feds balance the budget two decades from now, interest charges on the government credit card will have cost taxpayers more than $800 billion,” Terrazzano added, noting that “taxpayers have every right to be skeptical that this government can exercise enough restraint to balance the books by 2041.”

However, Giroux said his report was not meant to show when the government would balance the budget, and that the CTF’s report is based on data liable to certain change.

“Our focus was not to try to determine when the government’s budget would return to balance, because that could change quite quickly,” he said.

“For example, if the government decides to increase military spending significantly, or to raise taxes, or to reduce spending in some areas, that could shift [the budget balancing] by several years relatively quickly.”

Regardless of whether it takes 20 years or longer to balance the budget, the CTF projects that the interest charges on the national debt will cost Canadian taxpayers $1.6 trillion over the next 40 years.