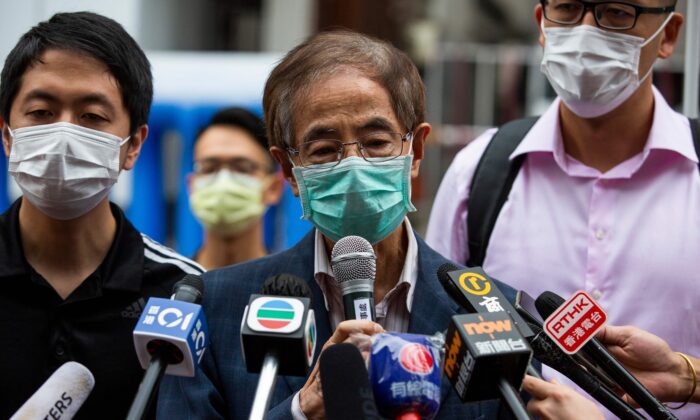 Former lawmaker and pro-democracy activist Martin Lee (C) talks to members of the media as he leaves the Central District police station in Hong Kong on April 18, 2020, after being arrested and accused of organizing and taking part in an unlawful assembly in August last year. (Isaac Lawrence/AFP via Getty Images)
Canada

Canada should take a stronger stance on the mass arrest of pro-democracy activists by Hong Kong’s Beijing-backed government, says the head of a Canadian Hong Kong support group.

Hong Kong police arrested 15 high-profile pro-democracy activists on April 18 on charges of illegal assembly during the 2019 protests in Hong Kong.

Waves of Hong Kong residents took to the streets last year, protesting Beijing’s encroaching control over the city’s affairs. The protests, which at times drew crowds in the millions, were initially triggered by a now-abandoned extradition bill that would allow the transfer to China of people wanted by Beijing. The demands of the protesters later evolved to a call for more democracy and for the authorities to account for their violence against the demonstrators.

Canadian Minister of Foreign Affairs François-Philippe Champagne said in a statement on April 19 that Canada is “concerned by the arrests of political figures,” and that there is a need for “close scrutiny” on these “extraordinary measures.”

“We urge all sides involved in the crisis to exercise restraint, to refrain from violence, and to engage in peaceful and inclusive dialogue to address the legitimate concerns expressed during the 2019 protests,” the statement reads.

Fung’s organization is among 40 Hong Kong support groups worldwide who have issued a joint statement asking the international community to condemn the arrests.

The joint statement asks countries around the world to call for the charges against the activists to be dropped, and to use Magnitsky laws to sanction Chinese and Hong Kong officials responsible for violating human rights.  Canada passed its own version of the law in 2018. Under the legislation, foreign individuals responsible for gross human rights violations can be sanctioned in Canada.

Among the activists arrested are the founder of Hong Kong’s Democratic Party Martin Lee and lawmaker Leung Yiu-chung. Eight former lawmakers were arrested as well.

The United States issued a statement on the day of the arrests condemning the Hong Kong authorities’ move.

“Beijing and its representatives in Hong Kong continue to take actions inconsistent with commitments made under the Sino-British Joint Declaration that include transparency,” U.S. Secretary of State Mike Pompeo said in a statement. The declaration set the terms for the transfer of Hong Kong from British rule to Chinese rule, requiring that Hong Kong maintain a high degree of autonomy.

Australia’s Foreign affairs Minister Marise Payne said in a statement that Hong Kong law allows freedom of speech and assembly, saying the issue is especially concerning as the arrests happened during the COVID-19 pandemic.

The U.K.’s foreign affairs ministry also said in its statement that “the right to peaceful protest is fundamental to Hong Kong’s way of life.”

Conservative MP and shadow minister for Canada-China relations Garnett Genuis said in a Facebook post that the Chinese regime is using the pandemic “as a cover for abuses” in Hong Kong. He added that the federal government’s response to the arrests is “weak.”

“Instead of condemning the arrests, it calls for ‘close scrutiny’ and restraint on ‘all sides.’ Canada should take a strong stand for democracy and against injustice,” he said.

A spokesperson for Global Affairs Canada declined to provide further comment beyond the minister’s statement on the issue.

Fung says it’s important for Canada to “support the Hong Kong people” because the autonomous region is “ground zero” for repression from China’s communist regime.

“Whatever you want to learn about China’s sharp power and infiltration and manipulation, we can learn from the experience of Hong Kong. Therefore, it is of strategic importance that we render our support to the people of Hong Kong,” she says.

She adds that the Chinese communist regime’s behaviour in the face of the pandemic has shown the world the “true nature” of the regime. “They hid the facts and truth from their own people about the outbreak and subsequently caused a pandemic around the world, killing so many lives.”

The actions of the authorities at this stage are particularly important, she says, as Hong Kong is heading into an election for its legislative assembly in September. She says the pro-democracy camp is expected to win large numbers of seats—as was the case during local elections last year where the camp won by a landslide—but notes that there are concerns the government could use “all kinds of excuses” to disqualify elected members or take other measures to undermine the democratic process.