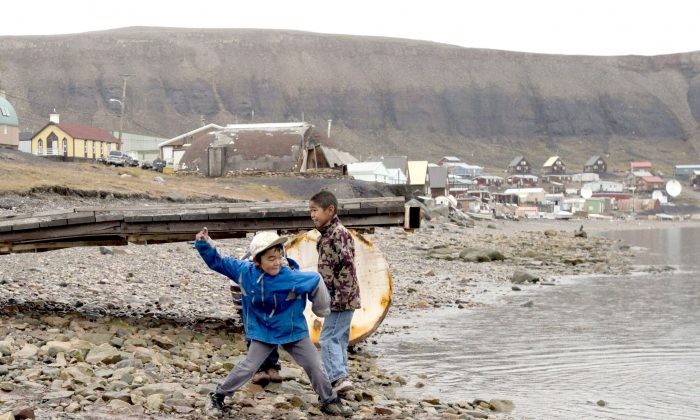 Children skip stones in Arctic Bay, Nunavut, in this file photo. Although tuberculosis is almost unheard of in the south, it is present in many northern reserves and in 17 out of 25 Nunavut communities. (The Canadian Press/Adrian Wyld)
Canada

One of the country’s strongest international voices in the fight against AIDS says Canada owes the Inuit a full explanation of what happened to relatives removed from their homes to be treated for tuberculosis in the 1950s and ’60s.

“It was something that continues to complicate the entire response to tuberculosis now,” said Stephen Lewis, co-director of AIDS-Free World and former United Nations special envoy on AIDS/HIV.

“It’s like another level of the residential school phenomenon.”

Lewis has been working internationally for years to fight the spread of AIDS/HIV and tuberculosis, which are strongly linked. But at a recent conference in Durban, South Africa, he learned tuberculosis continues to be a major problem back home.

“My colleagues said to me, ‘Look, Stephen, you’ve been neglecting your own country.’ They were right.”

Although tuberculosis is almost unheard of in the south, it is present in many northern reserves and in 17 out of 25 Nunavut communities. Infection rates are about 50 times higher among Inuit than in the general population, according to 2016 figures.

“I was startled to find the incidence in Nunavut is so much higher,” Lewis said.

The problem is often blamed on poverty and overcrowded homes in Arctic communities. But sociologists have said one of the factors that make TB hard to handle is the memory of how Inuit were treated in the past.

Research suggests the disease took firm root among the Inuit after they were moved from hunting camps on the land into communities with government-provided, one-room houses with no bathrooms. Others lived in cramped shacks cobbled together from construction debris, which provided ideal conditions for the disease to spread.

Hospital ships such as the C.D. Howe sent Inuit who tested positive for the disease to southern treatment centres.

Many lost their language and culture after years in the south.

Many never returned at all or lost contact with their families—a lingering psychological scar in many communities, said Lewis, who met last week with Inuit in Iqaluit and Igloolik.

Elders talked about “the evacuation and the total disruption of families and the devastation of not knowing what happened. They were not able to talk about the story without weeping,” he said.

“For many of them, they’re still searching for a grave site. They still don’t understand why they don’t know what happened.”

A formal apology is due, said Lewis. He also urged the federal government to grant a request from Inuit organizations to open its archives and let Inuit trace their lost family.

Indigenous Services Minister Jane Philpott said the government is aware of past and present issues around TB. She said she’s met with Inuit leaders on the subject as recently as last week.

“These are conversations that are taking place very actively,” she said. “We are determined to address this, both in the context of redress for historic injustices, but also with a very strong focus on people who are living now with tuberculosis.”

Philpott acknowledged that memories of their treatment in the past is affecting how Inuit see TB today. But releasing historic information isn’t her department’s responsibility, she said.

“My priority is recognizing present-day services and those are areas where there’s a tremendous amount of work to be done,” she said.

“There’s no questions terrible injustices have taken place in the past.”

Lewis said that even after years of travelling around the world to underdeveloped countries, last week’s trip was an eye-opener.

“These are Canadian citizens,” he said. “How dare we treat them this way.”