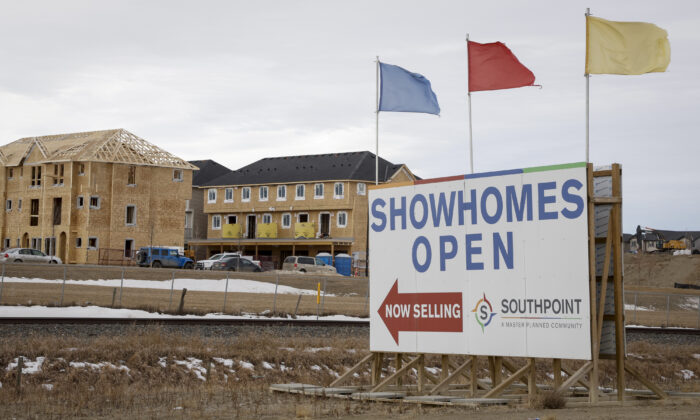 New houses under construction and for sale in Airdrie, Alta., on Jan. 28, 2022. (The Canadian Press/Jeff McIntosh)
Canada

Ottawa is seeking to add exemptions to a bill that temporarily bans foreigners from purchasing residential property in the country, according to the Canada Mortgage and Housing Corporation (CMHC).

Bill C-19, an omnibus budget bill that includes enacting the Prohibition on the Purchase of Residential Property by Non-Canadians Act, received royal assent on June 23. The act is set to come into force on Jan. 1, 2023.

The act prohibits non-Canadians from purchasing residential property in the country for a period of two years, and restricts them from dodging the prohibition by using corporations or other entities to make purchases. Any person or entity that knowingly assists a non-Canadian in contravening the prohibition is guilty of an offence and subject to a fine of up to $10,000.

But the government is also seeking public feedback on its proposal to include exemptions for certain groups of people who qualify as temporary residents in Canada, according to the CMHC, which has launched a public inquiry into the government’s proposal.

“The Government is now working to finalize certain details in regulations under the Act,” the CMHC wrote in a consultation paper published on Aug. 8. “These details include selected definitions, exceptions and enforcement elements.”

The CMHC detailed a list of exemptions for certain groups of foreigners, including immigrants who have filed five years’ worth of income tax returns, foreigners who have lived in Canada for a minimum of 275 days in each of the five calendar years preceding the year in which the purchase is made, and skilled foreigners with work permits, foreign students, diplomats and refugees who “become important contributors to our economy.”

The exceptions are limited to the purchase of residential properties not exceeding a price of $500,000, anywhere in Canada.

Foreign buyers have accounted for about 15 percent of new condo sales in Vancouver and six percent in Toronto, by official estimate, according to Blacklock’s Reporter. The CMHC, the federal insurer, had complained about the lack of “accurate and reliable data” on the scope of foreign ownership nationwide in a 2017 Access To Information records obtained by Blacklock’s.

The act to ban foreign investment in Canada was part of Prime Minister Justin Trudeau’s election promises made in August of last year.

“We’ll crack down on the predatory speculators that stack the deck against you,” Trudeau said in a video released on Aug. 25, 2021. He also said that it’s “time for things to change” in the housing market, and pledged “no more foreign wealth being parked in homes that people should be living in.”

The proposed exemptions in the ban came after a Feb. 28 vote in the House of Commons finance committee, in which Liberal MPs rejected a motion to strictly enforce their promised two-year ban.

“I have to say one of my frustrations over the last six and a half years has been the slow pace which the Liberal government undertakes to meet its own commitments,” NDP MP Daniel Blaikie said at the time.

On June 9, 2021, parliamentarians also voted 180-147 in favour of a Conservative motion to “examine a temporary freeze on home purchases by non-resident foreign buyers who are squeezing Canadians out of the housing market,” reported Blacklock’s Reporter. The Cabinet at the time voted against the motion.