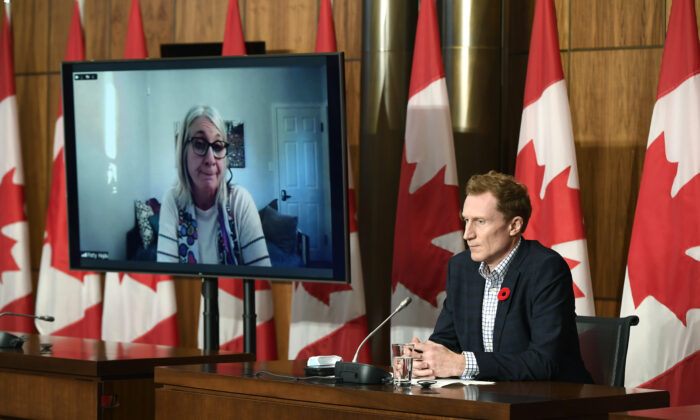 Minister of Crown-Indigenous Relations Marc Miller (R) listens as Minister of Indigenous Services Patty Hajdu, appearing via video conference, speaks during a news conference regarding the order from the Canadian Human Rights Tribunal to compensate Indigenous children and their families, in Ottawa on Oct. 29, 2021. (Justin Tang/The Canadian Press)
Canada

Ottawa has signed a $20 billion final settlement agreement to compensate First Nations children and families after a tribunal ruled that it has underfunded child welfare payments on reserves.

In January, the federal government, the Assembly of First Nations, and plaintiffs in two class−action lawsuits reached an agreement-in-principle, in which the government committed to provide payment to First Nations children and families who were determined to be underfunded or didn’t receive public support dating back to 1991.

The parties announced on June 4 that the agreement had been finalized though it must still be approved by the Canadian Human Rights Tribunal (CHRT) and Federal Court.

The $20 billion accounts for half of an overall $40 billion deal that aims to reform the child welfare system, including funding over five years for the First Nations Child and Family Services program.

Indigenous Services Canada says the settlement is the largest in Canadian history.

In December 2020, the attorney general of Canada filed an application for a judicial review of CHRT’s compensation order for First Nations children, arguing that broadening the eligibility criteria of children receiving services through Jordan’s Principle went beyond the tribunal’s jurisdiction.

Jordan’s Principle is a child-first principle meant to prevent First Nations children from being denied essential public services or experiencing delays in receiving them, according to the CHRT.

The CHRT had ruled in July 2020 and November 2020 respectively that the federal government must adhere to its orders by providing services to First Nations children, including children without Indian Act status who live off-reserve but are recognized as members by their Nation.

The Federal Court upheld the Tribunal’s decision and dismissed the attorney general’s application last September, saying that “the Applicant has not succeeded in establishing that the Compensation Decision is unreasonable.”