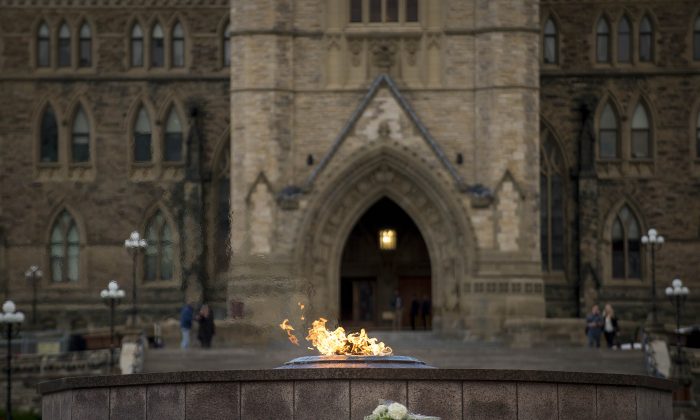 A bouquet of flowers sits in front of the eternal flame in front of Canada's House of Parliament in Ottawa, on Oct. 23, 2014, one day after multiple shootings in the capital city and Parliament buildings left a soldier dead and others wounded. (Peter McCabe/AFP/Getty Images)
Canada

Ottawa Shootings: Canada ‘Lost Its Innocence’ a Long Time Ago

To read much of the media coverage of the shootings at the Canadian parliament in Ottawa, you might think that Canada has just lost its innocence—that sleepy Ottawa has finally been dragged into the real world of 21st century security and that Canada had never been the target of terrorism before.

That is simply not the case. In 1985, 329 people, most of them Canadian citizens of Indian origin, were killed when a plane travelling from Canada to India was blown out of the sky by a bomb planted by Sikh extremists—one of the deadliest terror attacks in world history prior to 9/11.

The Ottawa shootings are not even the first terrorist attack to target Canada’s Parliament Hill: in 1989, a passenger bus was hijacked at gunpoint and driven onto the grounds to protest the ongoing Lebanese civil war. The hijacker later surrendered peacefully.

And in 1966, Paul Chartier, a man angry at the Canadian government, took a bomb into the same parliament building as the recent shootings. He was killed when his device exploded in a bathroom.

This was not even the first gun attack on a Canadian legislature: in 1984, a disgruntled member of the Canadian military entered the National Assembly of Quebec and killed three people before surrendering.

Of course, those other events did not have social media or the plethora of 24-hour news channels to amplify the terror, no matter what the scale of the attack. That explains not just the much wider impact of the 2014 incident compared to deadlier past attacks, but also the already enormous pressure on the Canadian state to conspicuously and decisively respond.

Most obviously, there is serious pressure to further restrict access to the grounds of Canada’s legislative assembly. At one time, ordinary citizens could drive onto the grounds and freely walk into the main entrance of the parliament buildings without challenge. That openness did not withstand the bus hijacking and 9/11, and yet, a man with a rifle was still able to enter Canada’s centre of government.

Still, even the most secure locations in the world are not impregnable. Only weeks before the Ottawa incident, a man armed with a knife was able to enter the White House, a much more heavily guarded structure, before being subdued.

There is also renewed pressure on the Canadian Security Intelligence Service and the Royal Canadian Mounted Police to step up their monitoring of potentially violent extremists. But the Canadian government and its agencies have hardly been unaware of the threat posed by radicalised Canadian citizens and residents.

Two such individuals participated in the January 2013 attack on an Algerian oil refinery in which 40 workers were killed. And recent government report on the terrorist threat to Canada estimated that at least 130 Canadians had gone abroad to fight for a variety of radical groups, and that dozens had already returned. Active investigations were underway on 90 individuals.

For his part, the gunman in this attack was already known to the authorities for his radical views and had already been prevented from obtaining a passport out of fear he intended to go abroad to fight. A similar course of action was taken with another attacker who killed a soldier with his car in Quebec on Oct. 20 before being shot dead by the police.

The Canadian government had already been promising additional monitoring powers for Canadian security agencies prior to the attacks of this week. The pressure to install these new powers, along with additional ones that will raise the hackles of civil libertarians, will now undoubtedly grow.

The truth is that in a free and open society, attacks by single individuals who are prepared to die will always be difficult to detect and stop unless governments are prepared to lock away anyone found to be harbouring radical thoughts.

A more emotionally difficult but more worthwhile response to these horrible events would be to avoid over-reaction, which essentially offers the terrorists a victory they do not deserve. That’s not just a matter for Canada to consider—it is an uncomfortable reality that a number of western countries, including the United States and the United Kingdom, are having to grapple with as well.

Steve Hewitt is a senior lecturer in American and Canadian studies at the University of Birmingham in the U.K. This article was previously published on TheConversation.com