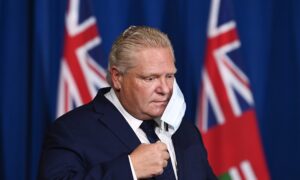 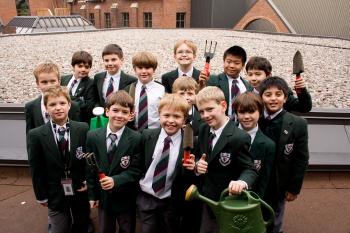 UP ON THE ROOF: Ashbury College students from the Junior School Environmental Club pose for a photo on the roof of the school's theatre where a green roof will be built. (Samira Bouaou/The Epoch Times)
Canada

OTTAWA—When the students of Ottawa’s Ashbury College suggested building a green roof a few years ago, it sowed the seed for a first-of-its-kind eco-project among Canadian independent schools that promises much more than conventional environmental goals.

While other schools have built green roofs to help reduce energy use and contribute to cleaner air, Ashbury’s roof will be more functional, allowing students to actually use it for classes and gardening.

Ashbury’s fundraising for the 525-square-metre octagon-shaped green space above the school’s theatre is halfway completed. It will double as an outdoor classroom for the all-boys Junior School (grades 4 to 8) and co-ed Senior School (grades 9 to 12).

“They can get their hands dirty, they can do measurements, they can make use of the gardens, there’s no barrier between them and the green roof,” said Kendal Young, Assistant Director of the Junior School.

She noted that the Junior School students “have been just real champions of this project and unbelievably excited.”

Wildlife such as birds and insects will allow the students to study habitats and the diversity of living things, right on the roof, Ms. Young said.

And the green roof will help integrate environmental education and protection into the curriculum.

Ashbury plans to divide the roof into four quadrants to grow indigenous grasses, native herbs, native flowers, and vegetables, and build a classroom island in the middle with tables and chairs.

“We plan to use part of the roof garden to grow vegetables which can either be used in our kitchen or donated to a local food bank, as well as share with organizations such as the Shepherds of Good Hope,” said Tim Putt.

“Our green roof will challenge other schools to stretch their own environmental goals. They may not be able to fundraise to build a green roof but they can each take some steps to reduce their environmental footprint like introducing a composting program,” he said.

A green roof typically lasts at least twice as long as a traditional roof. It is estimated that Ashbury’s green roof will last 40 years.

Another aspect is cost savings. The school estimates it will save 8 percent on its heating and cooling bills, amounting to about $900 per year.

The green roof is part of Ashbury’s broader plan to become a leading Canadian independent school in environmental stewardship. Earlier this month, the school received the “Honourable Mention High School of the Year” award from Ecology Ottawa, a non-profit group working to make Ottawa “the green capital of Canada.”

As well, Ashbury has committed toward achieving “gold” status for its new boys’ residence under the LEED (Leadership in Energy and Environmental Design) green building certification system.

The green roof project needs $100,000 to complete. It will include reinforcing the existing roof, installing the green roof, and constructing a new access walkway.

About $55,000 has already been raised. The school is seeking donations and sponsorships from individuals and foundations and hopes the rooftop classroom will be up and running within the next two years.

Once the funding is in place, the construction will take one to two months.

Building the green roof itself will only take a few days. It will involve installing a waterproof membrane, root barrier, drainage layer, filter membrane, and then the growing medium with the initial pre-grown vegetation, along with some irrigation.

Of the two types of green roofs available, Ashbury will be installing the low-maintenance, light-weight “extensive” type with drought- and heat-tolerant plants such as various kinds of sedum, as opposed to the “intensive” type that requires deeper soil and are meant to support small trees, said Ms. Young.

“It’s nature-friendly because it will attract animal life to go up there.”
– Joshua, Grade 4

“It helps insulate the theatre as well, so in summer it can stay cooler and in the winter stay warmer. That’s an advantage because it’s more comfortable for people.”
– David, Grade 5

“The air there is going to be very fresh because there are lots of plants and they absorb a lot of carbon dioxide and produce oxygen.”
– Anthony, Grade 5

“I think it will be good because it will help the earth because it says in 2012 the earth might be destroyed.”
– Harry, Grade 5

“I think it’s very good because if we do it other people might decide to build green roofs as well, so it might start off a chain.”
– Arthur, Grade 5

“If it rains a lot or floods, all the plants will absorb the water. It will attract monarch butterflies and other insects that are endangered.”
– Veraj, Grade 5

“I think it’s very good for the environment and it will be fun to do classes and stuff up there because it’s better for your body, your health.”
– Aidan, Grade 5

“I think it will be really good because we can use some of the edible plants in the cafeteria.”
– Jeffrey, Grade 5

“I think a green roof is very good because we need more plants because forests are being cut down and just completely destroyed for housing and farmland.”
– Elias, Grade 4

“I think the green roof will be good because it would attract lots of wildlife and it would be cool to see if you could see wildlife at break time.”
– Adam, Grade 4

“I think having a green roof would be a great idea because it means more oxygen for us and it also helps keep my conscience a bit cleaner.”
– Gianni, Grade 5

“In the garden outside we are having problems with [wildlife] eating some of the plants, like the squirrels eat the tulips. So if we can put other things that they can’t eat up on the green roof, they can go there.”
– Jake, Grade 6