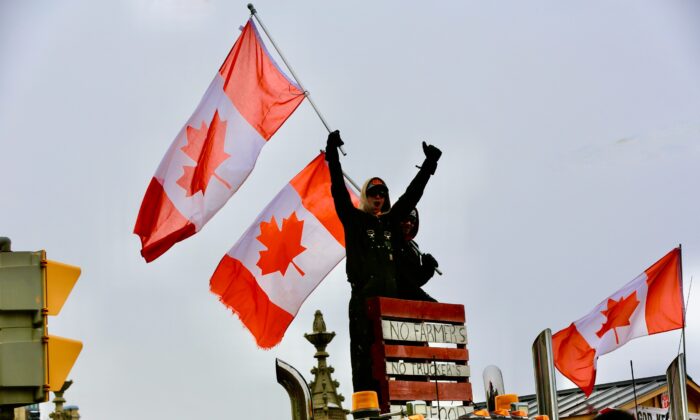 Ottawa Residents, Trucker Convoy Protesters to Face Off in Court

An Ontario court is set to hear arguments today in a $10 million lawsuit filed by an Ottawa resident against the truckers’ “Freedom Convoy” for damages allegedly caused by the honking of horns during the ongoing protests against federal COVID-19 mandates and restrictions.

On Feb. 4, 21-year-old Ottawa resident Zexi Li filed a lawsuit in the Ontario Superior Court seeking damages for emotional and mental distress, headaches, sleeping difficulties, difficulty concentrating, and interference with the “use and enjoyment” of her home.

The lawsuit names four Freedom Convoy organizers—Chris Barber, Benjamin Dichter, Tamara Lich, and Patrick King—and up to 60 big rig drivers with unknown names. The lawsuit seeks an injunction to stop the “non-stop blaring horns” that have caused “unbearable torment” for the roughly 6,000 residents living closest to the protests.

Li said in a court document that even when the honking has subsided, she is “unable to enjoy the relative quiet because she becomes riddled with anxious anticipation for the moment it will start up again.”

Superior Court Justice Hugh McLean has set a 1 p.m. deadline to collect all documents and complete cross-examinations before ruling on one part of the proposed class action on Feb. 7.

Ottawa mayor Jim Watson has called a special meeting (pdf) with the city council today at 1 p.m. to discuss the impact of the trucker convoy demonstration on the local residents and businesses.

The Justice Centre for Constitutional Freedom (JCCF) will be representing some of the convoy leaders and organizers in the Ottawa court to oppose Li’s application. The constitutional rights advocacy group said the court filings will reveal “a more realistic picture” of the protest than what the lawsuit claims.

“A more realistic picture of what is happening in Ottawa will soon be revealed by sworn affidavits filed in this court application,” JCCF said in a press release on Feb. 7.

“The Freedom Convoy has been working closely with the Ottawa Police Service, the RCMP, and the Parliamentary Protective Service.”

One of the witnesses in the court action has stated under oath that after receiving a complaint from a local resident, the convoy leaders have asked all truckers to avoid honking their horns between 8:00 p.m. and 8:00 a.m.

The witness also reported truckers and their supporters have been “feeding the homeless” and “maintaining the cleanliness of city streets.”

“Truckers have taken a whole trailer full of food to the homeless shelter. [Truckers are] maintaining the cleanliness of city streets, including picking up discarded masks on the ground, centralized garbage collection, shoveling snow at the War Memorial and the Terry Fox statue, and decorating and providing security for the War Memorial and Terry Fox statue,” said the witness statement.

An Ottawa resident, who works for Statistics Canada, said in a court document that the protesters were “peaceful and respectful.”

“I saw no violence or harassment. I was not impeded in any way, and could walk about freely and safely. I did not see any hateful symbols, in fact, I saw an abundance of Canada flags and Quebec flags as well as countless signs calling for freedom and the end of Covid related mandates,” the witness said.

“I would describe the scene as a peaceful, pro-freedom demonstration.”

The Freedom Convoy started off as a protest against the federal government’s COVID-19 vaccine mandate requiring all cross-border truck drivers to be fully vaccinated against the coronavirus, or would otherwise have to quarantine for 14 days upon re-entry into Canada from the United States. The movement expanded to a national scale while launching similar protests around the world, attracting support from those who are upset with pandemic restrictions.

The trucker convoy arrived at the national capital on Jan. 29 and protestors parked in the city’s downtown core have vowed to stay until all COVID-19 restrictions, mask, and vaccination mandates are lifted.

On Feb. 6, Watson declared a state of emergency, saying the move reflects the “serious danger and threat to the safety and security of residents posed by the ongoing demonstrations.”

Ottawa police seized fuel and made multiple arrests after issuing a statement on Feb. 6 threatening to arrest “anyone attempting to bring material supports” to the demonstrators.

“The right to peacefully protest is a fundamental right protected under the Canadian Charter of Rights and Freedoms. Governments across Canada have ignored Canadians, and bypassed their elected representatives in the passage of health and vaccination mandates which strip people of their jobs and civil liberties,” said JCCF Litigation Director Jay Cameron in the press release.

“People are tired of being ignored by the indifferent elite. The lack of meaningful democracy means citizens have no voice regarding health mandates. They have a right to peacefully protest and have their voices heard.”

Mimi Nguyen Ly and The Canadian Press contributed to this article