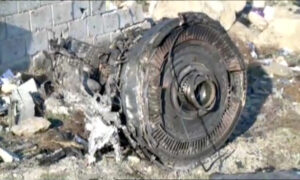 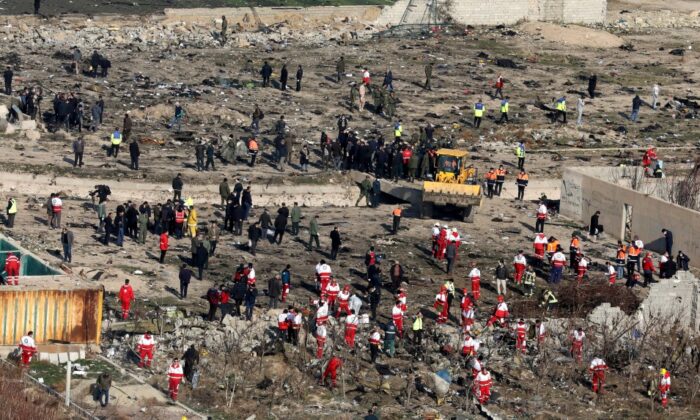 OTTAWA—The federal government is rejecting outright a final report by Iran’s civil aviation authority that blames “human error” as the reason why a passenger jet was shot down by the Iranian military in January 2020.

Iran’s Revolutionary Guard fired two missiles at Ukraine International Airlines Flight 752 shortly after it took off from Tehran on Jan. 8 last year, when “the aircraft was misidentified as a hostile target by an air defence unit,” says the agency’s final report into the crash.

“The report has really avoided addressing the substance and the real reasons behind shooting down the plane,” Alghabra said in an interview.

“It appears incomplete and has no hard facts or evidence,” he and Garneau said in a statement Wednesday.

Alghabra said the report fails to explain why Iran kept most of its airspace open to commercial traffic despite having just launched a missile strike against a pair of U.S. military facilities across the border in Iraq.

All 176 people on board the jetliner were killed, including 55 Canadian citizens, 30 permanent residents and dozens of others bound for Canada. The Tehran-Kyiv route has been an inexpensive first leg of a trip from Iran to Canada.

The federal government continues to call for a “comprehensive and transparent” investigation conducted according to international standards. A Canadian forensic team will produce its own report based partly on intelligence “in the coming days,” Alghabra said.

The report, which Canada’s arm’s-length Transportation Safety Board says it will comment on at a news conference scheduled for Thursday, echoes what the Iranian military said last year: human error caused the tragedy—an explanation found wanting by multiple countries that lost citizens.

Iran initially denied responsibility for the crash, but three days later said the Kyiv-bound Boeing 737-800 was shot down by accident after being mistaken for a missile amid heightened tensions with the United States. The admission came after video footage on social media appeared to show at least one missile striking the jet.

The disaster unfolded hours after Iran launched missiles into Iraq at two American military bases in retaliation for the U.S. having killed top Iranian general Qassem Soleimani near the Baghdad airport by order of then-U.S. president Donald Trump.

A group representing families of the victims—138 had ties to Canada—strongly rejected the report findings.

“(They) appear to be mere fabrications and a continuation of a lie,” the Association of Families of Flight PS752 Victims said in a release.

“The contents published in this report, as with their previous reports, contain countless inconsistencies and are grossly inadequate to justify Iran’s claims about the causes of the downing.”

Ralph Goodale, the former Liberal public safety minister who was named Canada’s special adviser on the response to the crash, called the report unconvincing, “shambolic” and “insulting” to loved ones.

“They also failed to alert their own air-defence missile operators about the identities of those innocent aircraft that were taking off. It’s just a litany of failure that sounds very much like wanton disregard for human life,” Goodale said in an interview.

Without an honest assessment of what went wrong and how it’s been fixed, Iranian airspace remains as potentially dangerous today as it was in January 2020, he said.

Britain, Ukraine, Afghanistan and Sweden also lost citizens when the plane was destroyed, and the countries formed a coalition with Canada to deal with Iran.

A series of mistakes led to the fatal missile launch, the Iranian investigation team found.

An incorrect read on the plane’s flight direction due to “human error” caused an operator to perceive the aircraft as flying northeast toward Tehran at a low altitude, rather than flying west away from the main airport, which it was.

The operator tried to alert the command centre to the apparent threat, “but the message was never relayed,” the report states.

“Without receiving a go-ahead or response from the command centre, he came to identify the target as a hostile one and fired missile (sic) at the aircraft against the procedure planned.”

The first warhead exploded near the aircraft, hurling more than 2,500 pieces of shrapnel toward it at nearly 6,500 km/h—more than five times the speed of sound—damaging the plane and aircraft systems but leaving its structural integrity intact, according to the report.

“(T)he three cockpit crew members were all still alive. They appeared to have sustained no physical injuries.”

The second missile “likely” did affect the aircraft, but the plane plummeted to the ground regardless, crashing near the airport and exploding on impact six minutes after takeoff and three minutes after the first missile detonated, the report said.

Prime Minister Justin Trudeau has urged Iran to provide justice and transparency to the victims and their families.

In December, Iran pledged to pay $150,000 to each family that lost someone on the plane, but Goodale rejected the offer at the time.

He said Iran doesn’t have the right to offer compensation to victims’ families unilaterally and that the final amount will be subject to negotiations between Iran and Canada and the four other countries whose citizens were killed on the plane.

“There’s more to reparations than just compensation. They will pursue a formal explanation of the facts,” Goodale said of negotiators.

Trudeau has promised Canada will offer a pathway to permanent residency for some family members, while those already here could apply to stay if needed. He also designated Jan. 8 as the National Day of Remembrance for Victims of Air Disasters.

The federal government also said scholarships would be set up in memory of the victims.

With files from Maan Alhmidi