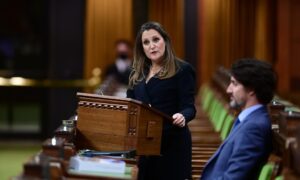 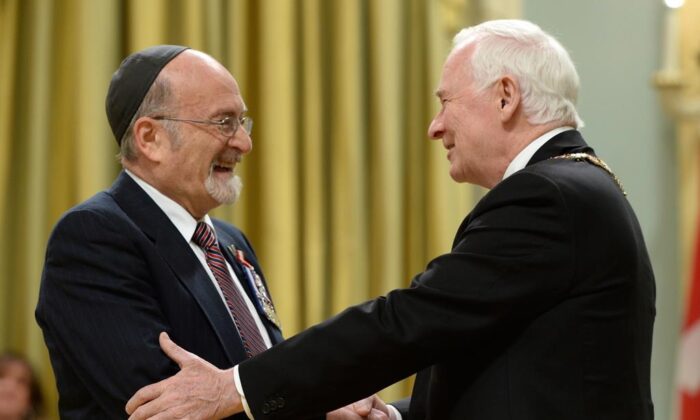 Governor General David Johnston invests Rabbi Reuven Bulka of Ottawa into the Order of Canada to during a ceremony at Rideau Hall in Ottawa on May 7, 2014. (The Canadian Press/Sean Kilpatrick)
Canada

He died Sunday morning in New York City where he had moved to spend time with his five children after being diagnosed with advanced stage pancreatic and liver cancer in January.

Bulka was the rabbi, and then rabbi emeritus, at Ottawa’s Congregation Machzikei Hadas for more than 50 years, but his constant presence at the annual Remembrance Day ceremonies in Ottawa helped earn him the nickname “Canada’s Rabbi.”

On June 3, federal legislation creating Kindness Week in the third week of February each year was given royal assent.

The bill was inspired by Bulka’s own Kindness Week, created in Ottawa 14 years ago to celebrate and foster community acts of kindness.

Bulka’s funeral will be livestreamed from New York at 4 p.m. Sunday.

Tributes immediately flooded social media for the rabbi, who championed causes like organ and blood donation and spearheaded many events aimed at promoting tolerance and understanding among people of different faiths.

“My heart aches this morning over the passing of Rabbi Reuven Bulka,” tweeted Sen. Jim Munson, the initial sponsor of the Kindness Week legislation.

“But in death as in life we always have to reflect on the Good things. Thanks to the dear Rabbi, we have a Kindness Week in Canada. Humbled to have played a role in getting it done. We did it Rabbi. We did it!”

“As ’Canada’s Rabbi,’ Rabbi Bulka inspired Jewish Canadians and people across the country to live with optimism, humility, and devotion to kindness,” Prime Minister Justin Trudeau said in a written statement. “And thanks to his tireless efforts, Canada was the first country to create a National Kindness Week. May his memory be a blessing.”

Bulka was born in England on D-Day, June 6, 1944, but grew up in New York City. He moved to Ottawa in 1967 to become the rabbi at Congregation Machzikei Hadas, a position he held until 2015 when he became rabbi emeritus.

In 2019, Ottawa renamed a park beside the synagogue Rabbi Bulka Kindness Park. He was given the key to the city in 2010.

“I am deeply saddened by the passing of Rabbi Bulka,” said Ottawa Mayor Jim Watson. “He was an outstanding community and religious leader who spent a lifetime bringing people together and fighting racism while looking for kindness in one another.”

He was awarded the Order of Canada in 2013 for “dedicated service to the community, notably in promoting interfaith dialogue, health and humanitarian causes.”

He was also awarded the Canadian Forces Medallion for Distinguished Service “for inspiring sermons, venerable presence and meaningful messages to Canadians during the national Remembrance Day ceremonies.”

Bulka was, however, heavily criticized for a 1995 book arguing against same−sex marriage, and his role in 2004 as a board member of the Scientific Advisory Committee for the National Association for Research and Therapy of Homosexuality, a U.S. organization which promoted the use of conversion therapy.

The House of Commons passed a bill last week banning the use of conversion therapy.