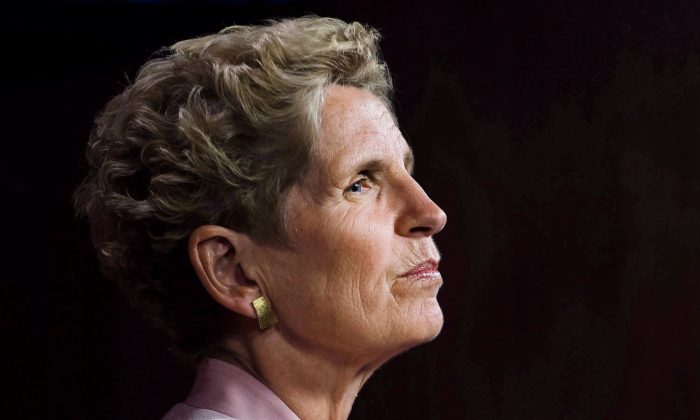 Former Ontario Liberal premier Kathleen Wynne said in a recent interview with Maclean’s that she gives herself a low score on the energy file, and an affordable energy advocate is warning that the federal government is going down the same road Ontario took.

“We were going to make big changes in terms of the supply mix and greening the grid and investing in the grid. I think it’s $50 billion that we invested in upgrading the grid. I believed in that.”

Wynne said she was warned that the province was taking on a lot of debt and that energy prices would go up, but she didn’t take it “seriously enough.”

Wynne served as premier from 2013 to 2018 and before that held different cabinet positions.

Dan McTeague, a former longtime Liberal MP who spent 37 years in the party machinery and now heads the advocacy group Canadians for Affordable Energy, says the federal Liberals should take note if they want to avoid the fate of the Ontario Liberals.

“I think it may very well be a time and a place where the siege on the Liberal Party and those who usurped and hijacked it beyond the green side will finally pack up and go after all the damage they’ve done,” he told The Epoch Times.

“It explains why the Liberals have been reduced to seven seats in Ontario. And I think the federal Liberals will wind up meeting the same fate if they don’t begin to pay heed to what Kathleen Wynne has done, albeit too late.”

Wynne also commented on the gas plants scandal, which involved what was seen as the politically motivated cancellation of plants in Mississauga and Oakville at a cost much higher than initially announced. It also likely influenced the resignation of Premier Dalton McGuinty and landed his staffer in jail for destroying electronic paper trails.

“I think when we got into situations like defending what had happened around the decisions around the gas plants, you realize: Holy mackerel. How did this happen? How did we get here? Which parts of this were we not paying attention to?” Wynne said.

Wynne, who has served as MPP for the Don Valley West riding of Toronto since 2003, is not running for office in the upcoming election this year.

With the rise of energy prices, which helps to fuel the rising prices of commodities, Canadians are starting to go through an affordability crisis, and McTeague says politicians will soon feel the heat and have to correct course.

McTeague, who’s known and sought for his gas price predictions, says the country is “heading towards an economic wall,” with a gas price average across the country that could reach $1.65 a litre.

“This is 2022. The federal government has two taxes that will be loaded on to what could very well be $100 oil, a weaker Canadian dollar, and nothing to fall back on,” he says.

Those taxes are the carbon tax, which increases every year, and the Clean Fuel Standard to come into effect in December.

McTeague says that at one point the cost of living will be a “bridge too far” for many people, and that the first thing they’ll blame will be the politicians.

“If Liberals want a death wish, stay the course,” he said.

“Once we get over the pandemic, once we get past the point of government inflating the economy, I think a lot of Liberals are going to have second thoughts about having embarked on this fanciful world of magic and make-believe in which you denigrate what most countries would give their right arm for: our abundant and affordable energy sector.”