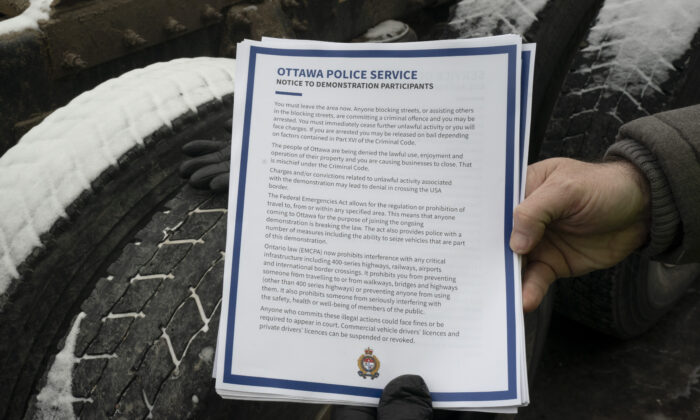 A police officer holds up a notice being distributed to protesters in Ottawa on Feb. 16, 2022. (Adrian Wyld/The Canadian Press)
Canada

A lawyer for the organizers of the truckers’ protest in Ottawa says the police seem to be preparing to remove the protesters by force, after a notice was distributed telling the protesters to go home or they would face criminal charges.

The notice comes after Prime Minister Justin Trudeau on Feb. 14 invoked the Emergencies Act to deal with the ongoing protests in the capital. The act gives authorities additional powers, such as providing legal tools to cut off funding to the protesters or freezing the corporate accounts of companies whose trucks are used in any blockades and removing their insurance.

“You must leave the area now. Anyone blocking streets, or assisting others in the blocking streets, are committing a criminal offence and you may be arrested. You must immediately cease further unlawful activity or you will face charges,” the Ottawa Police Services said in the notice issued on Feb. 16.

“The Federal Emergencies Act allows for the regulation or prohibition of travel to, from, or within any specified area. This means that anyone coming to Ottawa for the purpose of joining the ongoing demonstration is breaking the law. The act also provides police with a number of measures including the ability to seize vehicles that are part of this demonstration.”

In addition to fines and criminal charges, the notice says being charged or convicted in relation to the demonstration may result in “denial in crossing the USA border.” Protesters could also have their commercial vehicle driver’s licences and private driver’s licences suspended or revoked.

Keith Wilson, a lawyer representing the Freedom Convoy organizers, said the federal government has released a new proclamation under the Emergencies Act that “does not restrict Canadians’ rights of peaceful assembly,” and its legal wording “doesn’t say what the police are telling you it says.”

“The legal proclamation that was issued by the federal government continues to allow for peaceful protests. It allows for peaceful assembly. It allows for Canadians who are concerned about their charter rights and who want to bring their children to participate in the restoration of their future rights to come to Ottawa,” Wilson said Feb. 16 in a video posted on social media.

“The order says that you can only not come to Ottawa if you’re going to disrupt international trade, disrupt critical infrastructure, or engage in acts of violence. No one involved in this freedom movement, none of the truckers, support any of those things.”

The protests were started by truck drivers opposed to the federal government’s COVID-19 vaccination mandate requiring that all drivers crossing the Canada-U.S. border to be vaccinated against the virus. As long convoys of trucks drove to the capital to protest the measure, more supporters joined in to oppose all COVID-19 mandates and restrictions.

Wilson called on Canadians to come out in solidarity with the truck drivers, warning that the police “look to be gearing up” to use force to remove the protesters.

“It looks like the federal government is going to tell the police to go and use violence against lawful protesters, and one way to stop that from happening is Canadians who are concerned about their rights and government overreach to come to Ottawa as soon as you can get here and stand with the truckers,” he said.

“We believe the police are reluctant to follow this. If they follow what the federal government’s telling the police to do, it will be an illegal order, it will be unlawful. So if you come and stand with the protesters, it will make it harder for the police to act on what they’re being told to do.”