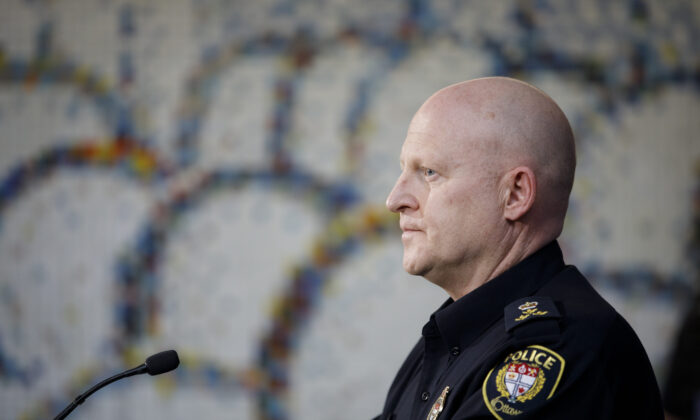 The Ottawa Police Service (OPS) did not request that the federal government invoke the Emergencies Act to deal with the Freedom Convoy protest in Ottawa this winter, its interim chief told a House committee on May 17.

“We were involved in conversations with our partners and with the political ministries; we didn’t make a direct request for the Emergencies Act,” said OPS interim chief Steve Bell in responding to a question from Conservative MP Andrew Scheer.

Bell was testifying before the Standing Committee on Procedure and House Affairs (PROC) which is studying the expansion of the parliamentary precinct to bring portions of Wellington and Sparks streets under federal jurisdiction in light of the trucker-led demonstration earlier this year.

In his testimony, Bell mentioned the OPS didn’t make a “direct request,” for the emergency measures but didn’t specify whether any other type of indirect request was made.

RCMP Commissioner Brenda Lucki stated to a different parliamentary committee on May 10 that she wasn’t aware of any police service requesting the act. She also told the special joint committee reviewing the public order emergency that her agency did not advise on or request invoking the act.

Prime Minister Justin Trudeau and Public Safety Minister Marco Mendicino have repeatedly claimed that invoking the act was done at the advice of law enforcement, which prompted police authorities to be questioned on the issue at committee.

“It was only after we got advice from law enforcement that we invoked the Emergencies Act,” said Trudeau on two occasions in the House of Commons during question period on April 27.

“We invoked the Emergencies Act on advice from the police,” Mendicino said in the House of Commons on May 3.

Other law enforcement agencies that were involved in managing the protest are the Ontario Provincial Police and the Parliamentary Protective Service, but they have yet to address the issue.

Another law enforcement agency that had some jurisdiction over cross-country border blockades that were launched in solidarity with the Freedom Convoy is the Canadian Border Services Agency (CBSA).

The Epoch Times asked CBSA repeatedly if it advised on or requested invoking the Emergencies Act. It didn’t confirm or deny doing so.

“The decision to declare a public order emergency was made by the Governor in Council,” said CBSA spokesperson Rebecca Purdy in an email statement.

When pressed, Purdy said it was all the information she could provide.

The Epoch Times also asked Public Safety Canada on May 13 if a law enforcement agency under its purview (RCMP and CBSA) advised on or requested the act, but the department has yet to provide a response, citing the need for more time.

Mendicino also testified before PROC on May 17 and was asked repeatedly by Scheer which police service requested invoking the act.

Mendicino did not answer directly.

“As I’ve said on a number of occasions now, we had robust exchanges with law enforcement, including the RCMP, including on the very prescribed measures under the Emergencies Act, which were used responsibly to restore public safety,” Mendicino said.

The government invoked the Emergencies Act on Feb. 14 to deal with cross-country protests and blockades demanding the lifting of COVID-19 restrictions. Its powers were used to clear the protest in Ottawa on the weekend of Feb. 18.

The act was revoked on Feb. 23 after being submitted to a vote of confidence in the House of Commons two days prior.