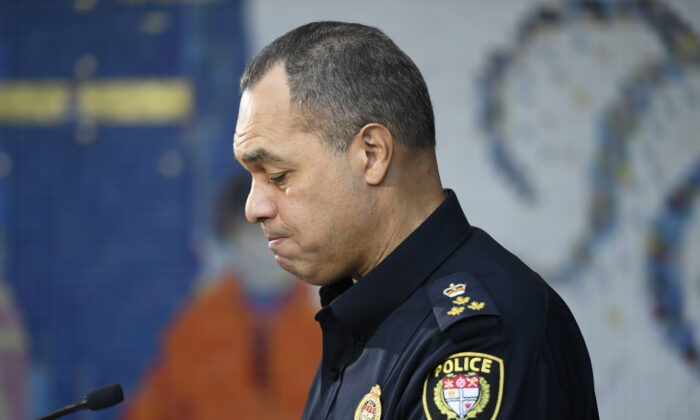 Ottawa Police Chief Peter Sloly speaks at a news conference on updated enforcement measures as a protest against COVID-19 restrictions continues into its second week, in Ottawa, on Feb. 4, 2022. (The Canadian Press/Justin Tang)
Canada

Sloly issued a statement on social media confirming his resignation.

“It is with a heavy heart I am announcing I have stepped down as Chief of the Ottawa Police Service,” he said.

Please see my statement below. pic.twitter.com/2tfUDPiKTI

“Since the onset of this demonstration, I have done everything possible to keep this city safe and put an end to this unprecedented and unforeseeable crisis. We have acquired new resources and enforcement tools, and stood up the new Integrated Command Centre. I am confident the Ottawa Police Service is now better positioned to end this occupation.”

City councillor Diane Deans said during an Ottawa Police Services Board meeting that the board and Sloly had “reached a mutually agreed-upon separation.”

Deans thanked Sloly for his service, and said there would be no more comment because “this is a labour relations matter.”

Ottawa Police Services’ Deputy Chief Steve Bell will be the interim police chief until the board has appointed a permanent replacement.

Dean noted the board’s priority is to put in place a plan to bring about a peaceful end to the ongoing protest in the nation’s capital.

The protests were initiated by truck drivers opposed to COVID-19 vaccination mandates for cross-border travel. As convoys of truckers made their way to Ottawa many supporters joined the movement, which turned into a large-scale protest against all COVID-19 mandates and restrictions.

With the protests now entering the third week, many of the demonstrators say they intend to stay until COVID-19 mandates are lifted.

The city of Ottawa, province of Ontario, and the federal government have declared states of emergency over the protests.

On Feb. 15, Public Safety Minister Marco Mendicino said an integrated command centre has been set up for the RCMP and OPP to work with local police in relation to the ongoing protests.

Mendicino said the federal government’s focus is ensuring the Ottawa police, as well as the RCMP and OPP, have all the tools necessary to “restore public order” in the city.

Prime Minister Justin Trudeau invoked the Emergencies Act on Feb. 14 to address the demonstrations, which grants additional powers to authorities to remove the trucks that have been encamped in the city’s downtown core since the end of January.

The act also grants powers to the government to strip citizens of the right to assemble if there is a “reasonable expectation” it may lead to a breach of the peace.

Citizens can also be prohibited from travelling to or within designated areas, or from using specified property. The government can also assume control of public utilities and services and direct people to render essential services.

The provincial premiers of Alberta, Manitoba, Saskatchewan, and Quebec have voiced opposition to Trudeau’s decision to invoke the Emergencies Act.

An Ottawa city council meeting that was slated for today has been bumped to Feb. 16 to allow local politicians time to receive updates on the issue.

In addition, the city says, the federal move to invoke the Emergencies Act requires more work and analysis to provide the council and the public with a better understanding of the tools now available.