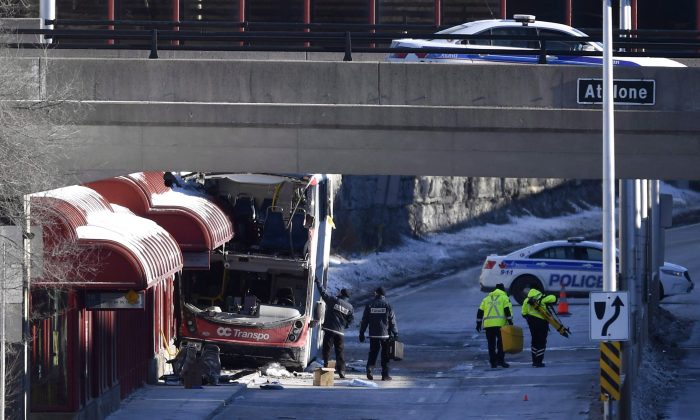 Officials from Transport Canada look at the scene where a double-decker city bus struck a transit shelter at the start of the afternoon rush hour at Westboro Station in Ottawa, on Saturday, Jan. 12, 2019. (Justin Tang/The Canadian Press)
Canada

OTTAWA—Two-hundred and twenty-four days after three people died when a double-decker commuter bus slammed into an Ottawa transit station, the woman who was behind the wheel has been charged in their deaths, as well as for injuring 35 others.

“The determination that we’ve made, in conjunction with the Crown attorney’s office, is that the actions of the driver that day did meet a criminal threshold,” said Bell.

He would not elaborate on the reasons for the charges, saying that will come out during the court proceedings.

Bruce Thomlinson, Judy Booth, and Anja Van Beek, all civil servants working for the federal government, died in the crash.

The double-decker transit bus was travelling to Kanata’s suburban Bridlewood neighbourhood from downtown Ottawa when it hopped a curb and struck the Westboro transit shelter at about 3:50 p.m., just as rush hour began. It plowed along a station platform and into the overhanging roof of the transit shelter, crushing several seats—and passengers—on the towering vehicle’s upper deck.

Police, firefighters, and paramedics were on the scene for hours in what Bell described as “a very tragic and complex and difficult situation on probably what was the coldest night of the year, in very adverse conditions.”

Some of the family members of the victims spoke up earlier this summer to complain about the lack of answers about how the crash happened, and radio silence from the city and police. Bell said Friday it was “a very complex” investigation that was made more difficult by the chaotic scene and the frigid weather. It was about −15 degrees Celsius when the bus crashed and the temperatures plunged below −20 degrees Celsius overnight.

But Bell said the investigators were thorough, dedicated and constantly aware of how traumatic the crash was for the families, the passengers and the city as a whole.

“That investigation started the second that we received a call at our 9-1-1 communications centre.”

Immediately after the Jan. 11 crash, police said the 90-passenger bus had been nearly at capacity, and that 23 people were injured. But the scene was chaotic and it took police a lot of time to track down every passenger that had been on board. Eventually police discovered that 35 people had been hurt badly enough to warrant criminal charges under the definition of bodily injury.

That definition includes any physical injury that interferes with health and comfort for more than a short period of time, including broken bones and concussions.

Several passengers had legs amputated following the crash. Others face years of rehabilitation for crushed legs.

Police would not elaborate on the current condition of any of the passengers, but said all of them had been updated about the charges ahead of the news being made public Friday.

Ottawa Mayor Jim Watson, who was spending most of Friday riding city buses and trains showing off the city’s new light−rail system, said in a statement the crash was a “traumatic” experience for the city.

“Today is a difficult day for the families of those three residents who lost their lives and all those who were injured in this tragic accident; my thoughts remain with them,” he said.

The municipality has faced multimillion-dollar lawsuits as a result of the crash but Bell said officers determined that the city wasn’t criminally liable in the accident. He said no charges will be laid against anyone else, including the city or OC Transpo, which runs the bus system.

Bell said Ottawa police received help from both the RCMP and the Ontario Provincial Police, as well as the Transportation Safety Board of Canada. More than 100 people were interviewed, including passengers and witnesses.

A spokesman for the safety board said the organization was not conducting its own investigation but was asked by the Ottawa police to provide some expertise on some specific elements. He would not say what those were.

Diallo was initially arrested at the scene but was later released without being charged. Police said early on they had ruled out impaired driving.