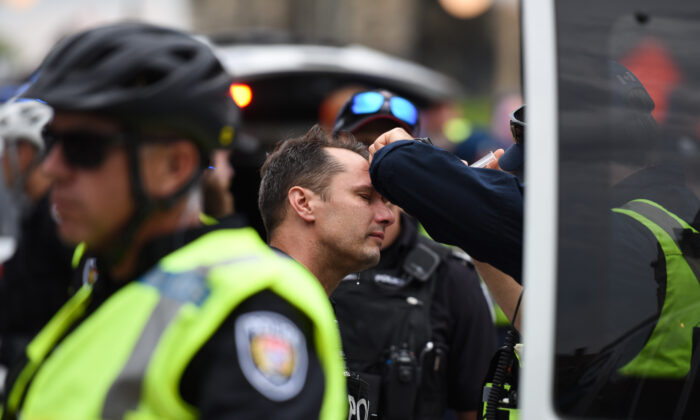 A police officer receives treatment after four people were arrested in a demonstration in downtown Ottawa on June 30, 2022. (The Canadian Press/Spencer Colby)
Canada

Police arrested four people in downtown Ottawa on June 30 as thousands flocked to the nation’s capital for Canada Day celebrations and protests.

The Ontario Police Service (OPS) says it is investigating an incident at the National War Memorial where “an interaction with officers became confrontational and 1 officer was choked.”

“Other officers immediately responded, 4 people were arrested,” the OPS said on Twitter on July 1.

There’s a massive clash between police and protestors at the War Memorial. It’s unclear what caused it. One officer is seen running from the scene holding his had over his eye. pic.twitter.com/JdpZFjlssh

The Epoch Times reached out to the OPS for further details but didn’t hear back.

Large crowds gathered at the National War Memorial as military veteran James Topp arrived at the site on June 30, the final stop of his journey that began in downtown Vancouver in February to protest COVID-19 vaccine mandates.

Several organizations had announced plans for events and protests in Ottawa for July 1 to call for freedoms and demonstrate against COVID-19 mandates and restrictions.

However, police on Guard for Thee, one of the groups supporting Topp, said that “given a recent incident in Ottawa,” it has decided to cancel its July 1 Family Day Picnic at the Strathcona Park.

Activist and independent journalist Andy Lee, who captured a video recording of the police intervention on June 30, told The Epoch Times she saw one police officer washing his eye with water. She said she didn’t witness what led to the incident.

Tom Marazzo, a military veteran who acted as the spokesperson for the Freedom Convoy back in February, said he doesn’t know the details of what led to the police intervention, but said the top priority for him and other protesters was maintaining the peace.

“We were focused on de-escalating the tension from the public towards the police in order to ensure a safe event and to not interrupt James Topp’s momentous celebration,” Marazzo told The Epoch Times.

We are reviewing video and investigating the incident at the National War Memorial this evening.
The initial investigation finds that an interaction with officers became confrontational and 1 officer was choked. Other officers immediately responded, 4 people were arrested

Topp’s career with an RCMP detachment as well as with the Canadian Armed Forces was impacted because he chose not to receive a COVID-19 vaccine.

As he made his way across the country on foot, he was joined here and there on his 4,300-kilometre trek by other supporters.

“The journey has been arduous, physically challenging, but at the same time it has allowed me to connect with my fellow Canadians in a way that I never would have thought possible,” he told a group of around 20 Conservative MPs on June 22.

Conservative MP and leadership candidate Pierre Poilievre joined Topp on June 30 as he made his walk to his final destination.

Many other groups are maintaining their plans for protests on July 1, including Freedom Fighters Canada, which says it has events planned at 3 p.m. in front of Parliament Hill to “march to freedom,” and a rally with speeches and live music at 5 p.m.