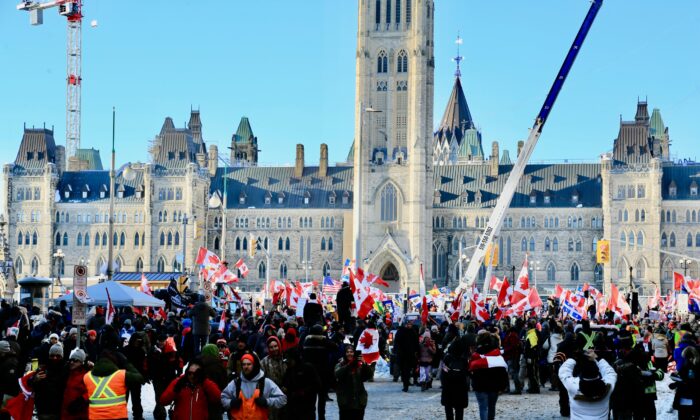 Ottawa’s mayor is calling on the federal government to appoint a mediator to help end the truckers’ convoy protest taking place in the city against federal COVID-19 mandates and restrictions.

Mayor Jim Watson told CTV News that he has suggested to federal ministers that they appoint a mediator who could be “an honest broker on both sides to try to find some common ground.”

“Someone of great stature in our community and the country who can actually open doors and bring some peace and calm to the situation,” Watson said. “That’s one option that I think the federal government should pursue because right now we’re at a complete standoff.”

Prime Minister Justin Trudeau has maintained he won’t be meeting with the protesters.

Convoy organizers say they want to talk with the government, but no representatives from any level of government have contacted them.

“The first thing they’ve got to do is call us… we’re sitting here, we’re waiting by the phone,” protest organizer Benjamin Dichter said in a press conference in Ottawa on Feb. 6.

The trucker convoy encamped in Ottawa began as a protest against the federal government’s COVID-19 vaccination mandate for all truck drivers crossing the Canada-U.S. border. It soon expanded to a national movement, attracting supporters across Canada who want to see an end to COVID-19 mandates and restrictions. It has also sparked similar protests around the world.

The convoy rolled into Ottawa on Jan. 29, and organizers say they will stay in the nation’s capital until the government lifts its COVID-19 mandates.

On Feb. 6, Ottawa’s mayor declared a state of emergency, saying that the move reflects the “serious danger and threat to the safety and security of residents” posed by the ongoing demonstrations.

“It also provides greater flexibility within the municipal administration to enable the City of Ottawa to manage business continuity for essential services for its residents and enables a more flexible procurement process, which could help purchase equipment required by frontline workers and first responders,” Watson said in a statement.

Watson has called a special meeting with the city council today to discuss the impact of the trucker convoy demonstration on the local residents and businesses.