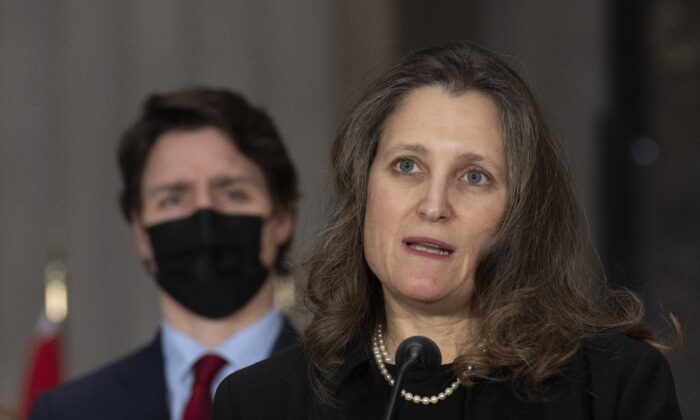 OTTAWA—The federal government may find itself with billions more in spending room on the back of soaring oil prices that experts say could lower the deficit, or give the Liberals space to fund a bevy of campaign pledges.

It’s a position similar to one the Liberals found themselves in last December when a rosier economic picture gave the government $38.5 billion in extra spending room, which was quickly eaten up by $28.4 billion in new and previously promised spending.

Since then, oil prices have gone even higher than the Finance Department had envisioned, with no immediate signs of easing.

The jump in prices could lower the federal deficit by as much as $5 billion through higher corporate tax revenues from oil and gas companies, said Trevor Tombe, an economist at the University of Calgary.

“That’s more than the entire planned federal spending on new child−care initiatives,” he said, referring to the $4.9 billion over the next 12 months in new spending outlined in last year’s federal budget.

“So it’s a meaningful improvement in the federal bottom line.”

In December, the Finance Department forecasted the government’s bottom line would show a deficit of $58.4 billion for the fiscal year that starts in April, not including any new spending promises, following two years of even deeper deficits.

The parliamentary budget office at the start of March forecasted that the deficit next year would be $47.9 billion because of higher−than−anticipated tax revenues.

Rebekah Young, Scotiabank’s director of fiscal and provincial economics, said her number−crunching leads to a similar result and could provide enough fiscal room for the Liberals’ remaining platform promises, which the budget office estimated at $48.5 billion over five years.

The Liberals aren’t likely to walk back on those promises, especially anything linked to efforts to close a housing affordability gap, Young said, but they may temper spending lest it be seen as adding to inflation rates at three−decade highs.

“I think they’re going to do the minimum that they can to fulfil their pledges, but otherwise hold the line, recognizing what is going on in inflation right now,” she said.

While a problem for consumers, higher inflation rates provide a boost to federal revenues.

A one−year, one per cent increase in inflation rates lowers the deficit by about $2 billion per year — although that can easily be wiped out by higher interest rates, which the Bank of Canada is hoping to push up to bring inflation back to its comfort zone.

The possibility of prices rising faster for longer is why the government and central bank must pull back on stimulus or risk entrenching higher inflation, said former parliamentary budget officer Kevin Page, now president of the Institute of Fiscal Studies and Democracy at the University of Ottawa.

“It would be a policy mistake for the government to assume that higher−than−anticipated inflation will create extra fiscal room which could be used to deficit finance longer−term programs,” said Page, citing health−care transfers, child care and a boost to the defence budget.

Finance Minister Chrystia Freeland has hinted at more military spending, following moves from NATO allies to boost defence budgets to equal two per cent of their domestic economies in response to Russia’s unprovoked invasion of Ukraine.

The conflict has changed the world since early February when the government surveyed private sector economists about their outlooks to help underpin budget calculations.

Prices at the pumps and grocery store are now growing ever higher as global prices for oil and wheat go up.

“The war and related sanctions are having significant impact on commodity markets. The world is facing a post−pandemic supply shock,” Page said. “Global growth will be reduced. Inflation will be higher. The risks are on the downside.”

The risks and uncertainties are why Young said she expects the budget to be conservative in its economic outlook. She said she plans to look at how much detail the government provides on its financial buffers to deal with any shocks that may yet come.

Freeland has yet to announce a budget date, but the document is expected to be released before the end of April.