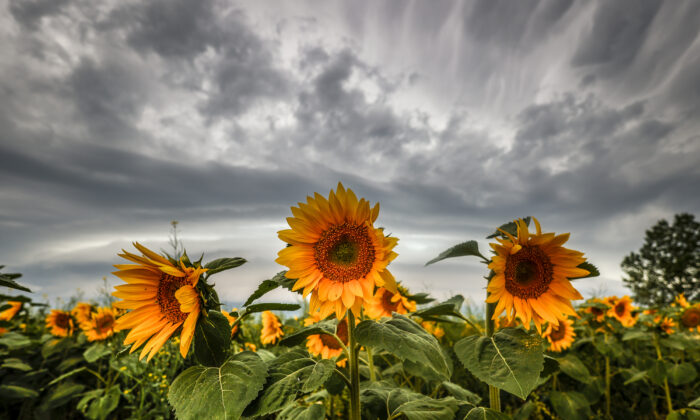 The federal government is launching time-limited consultations to ask average Canadians about their views of its climate change policies aimed at radically reducing fertilizer emissions, which farmers say will adversely impact food production amid a global food shortage.

A survey is available for people to submit their comments online until Aug. 31. Additional comments can be sent to Agriculture and Agri-Food Canada (AAFC) at aafc.fertilizer-engrais.aac@agr.gc.ca.

The consultations aim to stimulate discussion in relation to Canada’s fertilizer emissions reduction target of cutting emissions by 30 percent from 2020 levels by 2030, AAFC said in a statement.

“The feedback collected will be used by the Government of Canada to inform next steps in the development and implementation of a strategy to reduce emissions and improve nutrient management in Canadian agriculture,” the survey says.

The target objective is achieved through controlling “direct (following fertilizer application) and indirect (from nitrogen leached from fields and volatilized to the atmosphere as ammonia) emissions from the application of fertilizer,” AAFC said in a discussion paper.

The target does not include emissions from the manufacture of fertilizers.

According to a 2021 study commissioned by Fertilizer Canada, an industry group, slashing fertilizer use by just 20 percent could cost Canadian farmers more than $48 billion in lost sales by 2030 due to lower yields.

The AAFC document noted that agriculture accounted for approximately 10 percent (73 megatonnes of CO2) of Canada’s greenhouse gas emissions in 2019. Synthetic fertilizers contributed about 12.75 megatonnes that year, which is less than 2 percent of the nation’s total emissions.

The latest consultations are the second phase of the Liberal government’s public engagement process since it introduced its Strength Climate Plan in December 2020.

The previous consultations, held in March 2021, sought feedback from the agricultural sector, including commodity and grower associations, provinces, and industry organizations.

The feedback revealed the sector’s concerns on several fronts, including a negative impact on crop yields, according to the discussion paper.

“Several agriculture commodity and producer associations noted concerns that the fertilizer emissions reduction target could result in a decrease in crop yields,” the paper says.

“They questioned setting a target based on absolute emissions vs emission intensity, which appears to be in direct conflict with the Government of Canada’s export growth target of $75 billion worth of agriculture and agri-food commodities by 2025.”

Following a meeting between federal, provincial, and territorial agricultural ministers last month, Alberta, Saskatchewan, and Ontario expressed disappointment over the plan, saying at a press conference that the fertilizer emissions reduction would have devastating impacts on farmers.

“This has been the most expensive crop anyone has put in, following a very difficult year on the prairies,” Horner said. “The world is looking for Canada to increase production and be a solution to global food shortages. The Federal government needs to display that they understand this.”

In a tweet on July 22, Ontario Agriculture Minister Lisa Thompson said she’s “disappointed in the federal government’s approach to imposing fertilizer emission reduction targets when the world is struggling with food security.”

“As our farmers work to feed Canada and the world, we need to work with them and support their ongoing efforts to grow and produce the food we need,” she wrote.

Several Conservative parliamentarians have also pushed back against the plan, including John Barlow, MP for Foothills, Alberta, who said in a video that farmers are standing up against similar climate change policies introduced in several European countries.

“Farmers and consumers around the world are pushing back. They’re pushing back against the European Union’s farm-to-fork agenda, which is making farming unsustainable, food prices skyrocket, and food insecurity even more of a crisis,” he said.

On July 23, multiple convoy protests were launched across Canada in solidarity with farmers in the Netherlands and other European countries who have been protesting against climate change policies over the past few months. At least 55 convoys rolled out in eight provinces: Alberta, British Columbia, Manitoba, New Brunswick, Nova Scotia, Ontario, Quebec, and Saskatchewan.

Isaac Teo and Petr Svab contributed to this article.