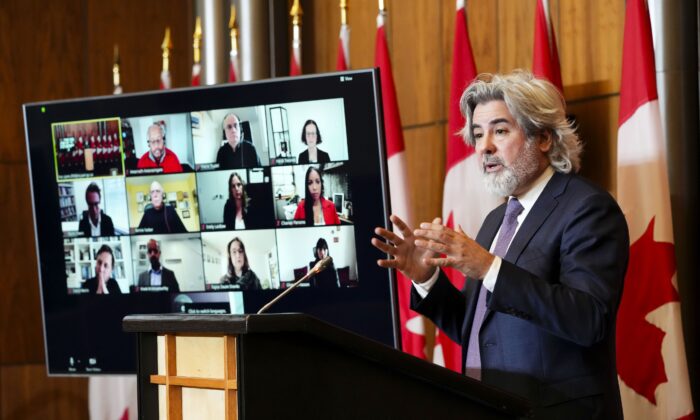 The federal government announced another measure on July 21 that will impact the information space, this time with a $2.4 million investment to counter “harmful online disinformation.”

Heritage Minister Pablo Rodriguez, the minister responsible for the file, has cited a desire to “have a common set of facts” as part of the motivation behind the new measure.

The initiative, funded by Canadian Heritage, aims to promote “civic, news, and digital media literacy through funding third-party educational activities and programming to help citizens become resilient against disinformation,” according to a statement.

“These projects will give Canadians skills and tools to tell fact from fiction online. We live and work better as a society when we have a common set of facts,” stated Rodriguez.

The funding is said to be particularly geared toward “online disinformation” in the context of the COVID-19 pandemic and Russia’s invasion of Ukraine.

Canadian Heritage says the public should have access to diverse and reliable sources of information to hold governments and public institutions to account.

The government funding will be provided to 11 different projects that responded to a call for applications from the department.

They will be producing podcasts and online courses, and engage directly with online platforms on the topic of disinformation.

This latest announcement by the Liberal government is part of a wider strategy to regulate the internet and affect what Canadians can hear and see online.

Prime Minister Justin Trudeau has repeatedly noted that “misinformation and disinformation” are issues he wants to tackle.

The government’s Bill C-11, which seeks to amend the Broadcasting Act, will grant powers to the Canadian Radio-television and Telecommunications Commission (CRTC) to regulate user-generated content, its chair has confirmed.

Another bill related to online content is Bill C-18, the Online News Act, which is meant to increase Canadian media online revenues. The bill has its critics, including University of Ottawa law professor Michael Geist, who says it will hurt press independence and increase reliance on Big Tech.

The government has also undertaken consultations with a hand-picked panel of experts to help craft its legislation to tackle “online harms.”

One of the experts on the panel teaches at the Max Bell School of Public Policy, which has received funding from the latest initiative. Others already work for programs funded by the federal government, such as the Canadian Anti-Hate Network.

Summaries of discussions from the panel working groups reveal many experts are in favour of regulating private communications with the future “online harms reduction” legislation.

The group of experts also agreed that “disinformation” has “grown to become one of the most pressing and harmful forms of malicious behaviour online.”

“Given the serious and urgent nature of the harms created by disinformation, experts argued that legislation on online safety should consider disinformation in some capacity,” says a discussion summary provided by Canadian Heritage.

Nevertheless, the experts said disinformation cannot be defined in legislation since the government cannot decide what is true and what is false, and disinformation usually carries an intent that is hard to establish.