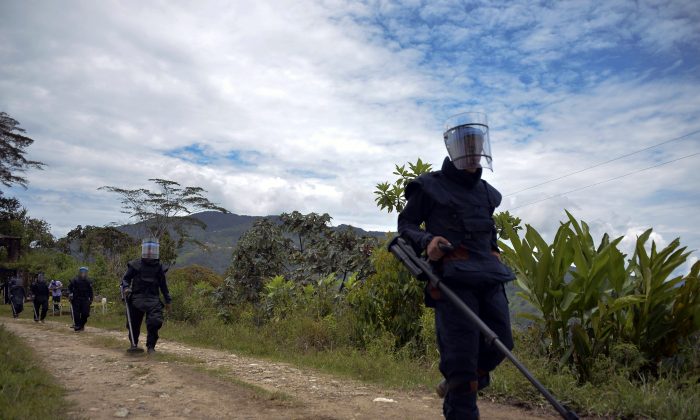 Soldiers conduct a de-mining training in Campo Alegre, Colombia, on April 16, 2015. Canada marks 20 years since the signing of the Ottawa Treaty, which became the cornerstone of the international effort to end the use of landmines. (Raul Arboleda/AFP/Getty Images)
Canada

Conference will mark groundbreaking treaty, but more work to be done
By Susan Korah

Twenty years ago on Dec. 3, 1997, representatives from 122 countries gathered in Ottawa to sign the Anti-Personnel Mine Ban Convention, a groundbreaking treaty that was seen as a diplomatic coup for Canada.

Canada was hailed for its leadership role in crafting the convention, also called the Ottawa Treaty, which became the cornerstone of the international effort to end the suffering and casualties caused by landmines.

On Dec. 4, anti-landmine activists from around the world will reunite in Ottawa to mark the 20th anniversary of the signing ceremony. The half-day conference will bring together parliamentarians, government officials, diplomats, civil society, de-miners, and landmine survivors to celebrate the success of the treaty and also discuss implementation gaps that currently need to be addressed.

Lloyd Axworthy, Canada’s minister of foreign affairs from 1996 to 2000 and a major architect of the treaty, was nominated for a Nobel Prize for steering it through to fruition.

“It was a real signature achievement of Canada. It showed that we don’t have to be a ‘big’ power or even a member of the U.N. Security Council to play such a leading role,” Axworthy said in an interview.

Although the prize went to Jody Williams, an American activist who was the founding coordinator of the International Campaign to Ban Landmines, Axworthy received high praise for initiating the “Ottawa Process,” setting in motion the international negotiations that led to the treaty.

“The efforts of Canada’s government and its people to end use of the weapon throughout the world, provide care, rehabilitation, and reintegration to mine victims, and bring relief to mine-affected communities is unparalleled,” Cornelio Sommaruga, president of the International Committee of the Red Cross, said at the time.

The people he referred to included civil society organizations such as Mines Action Canada, and individuals such as Ted Itani, one of eight military experts invited to contribute to a 1996 International Committee of the Red Cross research report called “Anti-Personnel Mines: Friend or Foe?”

The report, launched in various world capitals including Ottawa, concluded that the damage done to civilians by anti-personnel mines far outweighed their military usefulness.

“Singer Bruce Cockburn was a high-profile Canadian who [also] did much to raise awareness of the issue,” noted Paul Hannon, executive director of Mines Action Canada, an NGO that was on the forefront of the campaign that lobbied for the treaty.

Cockburn’s 1995 song “The Mines of Mozambique” called attention to the plight of Mozambicans dealing with the aftermath of almost 30 years of war, which left the country riddled with landmines.

Twenty years and much work later, in September 2015, the last landmine in Mozambique was removed. Cockburn was also involved in efforts to bring about the Ottawa Treaty.

Millions still in the ground

Today, implementation reports indicate that over 30 countries are no longer contaminated by the deadly weapons, which have killed and injured more civilians than military personnel since they were first extensively used in the American Civil War of 1861–65.

However, the ongoing use of landmines by some non-signatories to the treaty remains a concern, with millions still in the ground in a handful of countries.

Organizations such as Amnesty International and the International Campaign to Ban Landmines have provided evidence to back a claim by Bangladesh that the Myanmar military has laid landmines along its border with that country in order to block the path of the Rohingya, the ethnic minority fleeing violence in Myanmar.

Given that Bangladesh is a signatory to the treaty but Myanmar is not, Canada and other human rights-supporting nations have few options.

“We document and prove that there are landmines, then we condemn the party that has laid these mines. We then encourage the other 162 signatory countries to put pressure on the offender,” said Hannon.

“We shouldn’t be giving aid to such countries,” said Axworthy. “We could place sanctions on them and pursue more aggressive policies in condemning them.”

Axworthy noted that while Canada played a strategic role in bringing this treaty to fruition in 1997—resulting in saving tens of thousands of lives—the next goal is to universalize it, or bring all the world’s 195 countries on board by 2025.

He said Syria and Iraq are outside the fold, and that non-state actors, such as warlords and rebel groups like the ISIS terrorist group, continue to use landmines. Another country that openly uses landmines is North Korea.

“Raqqa and Mosul, and many parts of Colombia have yet to be de-mined,” Axworthy said, adding that Canada has been actively assisting de-mining operations in Colombia since that country’s peace accord was signed.

On the occasion of the 20th anniversary, Thomas Hajnoczi, the president of the Anti-Personnel Mine Ban Convention, called on countries that are still using landmines to “take the right side of history and abolish these weapons once and for all.”

“Recent reports of landmine use in and by a small number of states is still a concern. While these remain the exception, their actions, however, should be strongly condemned by the international community,” Hajnoczi said in a press release.

Two leading landmine charities, Mines Advisory Group and the HALO Trust, have set a goal of a world free of landmines by 2025.