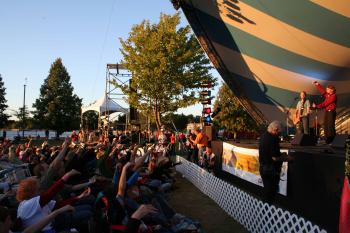 The audience at the 2007 Ottawa Folk Festival participates in the 'Alligator Song' performed by The Arrogant Worms. (Joyce MacPhee)
Canada

Joyce MacPhee
View profile
Follow
biggersmaller
Print
It’s a party for the people! The fifteenth annual Ottawa Folk Festival, to be held at Britannia Park from August 14 – 17 will feature music, art, culture, and solidarity in a beautiful park setting.

“The Ottawa Folk Festival is a one-of-a-kind magical environment and a vibrant community,” says the festival’s executive director Tamara Kater.

Evening main stage performances will be held daily and seven simultaneous stages will run during the daytime on Saturday and Sunday. A craft market, food fair and community group displays are also an integral part of the event.

The festival has grown to be one of Canada's finest music events, garnering a nomination for Best Folk Festival at the prestigious North American Folk Alliance Awards in Memphis earlier this year.

“We'll be honouring musical traditions and looking back at our own history and also looking to the future with lots of programming for younger audiences and families. We're introducing some exciting new features like a huge dance tent and build-your-own-ukulele workshops,” says artistic director Chris White.

The exciting “Common Ground” project allows 15 artists from diverse cultural and musical backgrounds to arrive in Ottawa before the festival to work together finding common ground and creating new music and dance pieces to perform at the festival.

The event is especially family friendly and children under 16 accompanied by an adult are admitted free. Reduced rates are available for ages 16 – 18 and 19 – 24. In the Kid Zone, children are encouraged to participate in a wide array of activities, ranging from doing crafts and playing instruments to marching in the famous Sunshine Parade held on Sunday afternoon.

They include Rufus Wainwright (son of Kate McGarrigle), Catherine MacLellan (daughter of the late Gene MacLellan) and Spiral Beach, a Toronto band of offspring of famous folkies that include Airick and Daniel Woodhead (sons of David Woodhead) and Maddy Wilde (daughter of Nancy White). There is even a third generation folkie, as Tao Rodriguez-Seeger, grandson of American folksinger Pete Seeger, will also perform.

One unique aspect of the festival is a large-format mural honouring the late Canadian musician Willie P. Bennett, which all festival-goers are encouraged to help create.

The project, dubbed “Music in Your Eyes”, will be overseen by Ottawa artist Arthur II. He undertook a similar ParticiPaint project at the 2007 festival using a canvas 8 feet high and 40 feet wide.

Ottawa performers will also have the opportunity to shine. A cross-section of artists from the nation’s capital includes Finest Kind, Ana Miura, Ball and Chain, and Woody Johnson. The wonderfully named band The Experimental Farmers, featuring Lynn Miles and Lonesome Paul, will also appear.