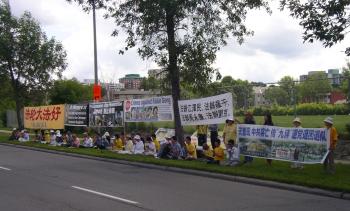 Falun Gong practitioners and supporters gathered in front of the Chinese embassy on July 20, 2009, to call for an end to the persecution of the spiritual practice which has lasted for ten years. (Cindy Chan/The Epoch Times)
US

Since then, they have held numerous protests and appeals at the embassy site, including a near-daily vigil that has become a familiar fixture on St. Patrick Street.

A decade has passed and the persecution remains relentless. Yet despite brutal oppression, peaceful resistance has continued inside and outside China, said Lucy Zhou, spokesperson of the Falun Dafa Association of Canada (FDAC), at a ten-year commemoration rally on Monday.

Falun Gong practitioners have persevered in their efforts to inform fellow Chinese citizens about the injustice and cruelty of the persecution. The practice has not only survived in China, but it has thrived overseas, Ms. Zhou said.

Hon. David Kilgour, former Member of Parliament and Secretary of State for Asia-Pacific, attended the rally and addressed the Ambassador of China in his speech.

“All of us here admire the people of China enormously. Our concern is how you treat your own people—not only Falun Gong practitioners, but many others in a long list of persecuted people of China,” he said.

He noted “the atrocities that continue to this day,” including torture, killing, deprivation of human dignity, and organ theft.

Along with international human rights lawyer David Matas, Mr. Kilgour is co-author of a 2006-2007 investigative report on the Chinese regime’s gruesome, large-scale practice of harvesting organs from Falun Gong prisoners of conscience in a lucrative trade.

“The two of us found 52 kinds of evidentiary proof indicating that this crime against humanity is occurring,” he said, adding that the Chinese regime has yet to make any substantive response to the report.

Noting that the Chinese regime often criticizes the Universal Declaration of Human Rights (UDHR) as a “Western document,” Mr. Kilgour pointed out that one of its key authors in 1948 was diplomat, philosopher, and playwright P.C. Chang, a “great man from China.”

In a paper commemorating the UDHR’s 60th anniversary in December 2008, Nick Gier, a veteran professor of philosophy at the University of Idaho, paid tribute to Mr. Chang and the “Chinese Influence on the Declaration of Human Rights.”

Mr. Gier noted that “Chang, more than any other representative on the drafting committee, stressed the importance of combining ethics and rights in the Declaration.”

“Carnivore capitalism” is “the type of capitalism that let’s anything go—any abuse of the natural environment, any abuse of your people, any lack of humanity toward the people,” he said.

Among the countless people who have suffered under the communist regime, “few Chinese citizens have been treated more brutally, more mercilessly, than the Falun Gong community,” Mr. Kilgour said.

Chen Guizhi, a 62-year-old practitioner now living in Montreal, has first-hand experience of the communist regime’s brutality. She languished for four years in two different forced labour camps in China before coming to Canada in February 2009.

Among the products she made were purses, gloves, toys, and sweaters, some of which were for export.

With a high quota to fill and under appalling conditions, even working an average of 12 hours a day, “very often we had to work overtime to finish the quota,” she said. “If we couldn’t finish our quota, the punishment could be extending our terms.”

‘What a human being does, heaven is watching’

Back in 1999, then-Chinese Communist Party (CCP) leader Jiang Zemin predicted that Falun Gong would be eradicated in less than three months, but it has now been ten years, noted FDAC president Li Xun.

“The communist regime’s goal of eradicating Falun Gong will never succeed,” said businessman and democracy activist Shi Xingjian. “What is beyond their imagination is that they will be facing a trial of worldwide scope for their crimes. They cannot escape, wash themselves clean, or cover themselves up. The only thing they can do is to acknowledge their guilt, submit to the law, and accept the judgment of history.”

Mr. Shi advised CCP officials at all levels to stop taking orders from Jiang and his accomplices to persecute Falun Gong, because they are only “tying themselves up with Jiang to be put on trial in the same court of law.”

“What a human being does, heaven is watching. Good will be rewarded with good, and evil will meet with retribution. For yourself, for your family, for your country, for the people of your nation, do not participate in committing crime,” he said.

Falun Gong practitioners in China continue to risk their lives to inform others of the atrocities being committed in the persecution, Mr. Li said.

He noted that there have been over 3,290 documented deaths to date, 87,000 accounts of torture, and 100 means of torture. An estimated 200,000 to 2 million practitioners are in detention centres and labour camps.

The true death toll may be in the tens of thousands, since “the Chinese regime imposes an information blockade and reporting these cases to outside authorities constitutes a severe crime of ‘leaking state secrets,’” said Mr. Li.

‘The CCP’s collapse is imminent’

Mr. Li pointed to the Nine Commentaries on the Communist Party, an editorial series published by The Epoch Times that has for the first time provided a comprehensive historical analysis of the CCP revealing its inherently evil nature of violence, deceit, and killing.

Since the series’ publication, over 57 million Chinese people have renounced their membership in the CCP and its affiliated organizations, and the withdrawals are continuing at a rate of between 50,000 to 70,000 per day, he said.

Thus, “the CCP’s collapse is imminent.”

“We believe the communist party itself is the root of the disasters and destructions that have plagued China since it took power. The only way to end the persecution and protect other Chinese from Falun Gong’s fate is to peacefully disintegrate the party,” said Mr. Li.