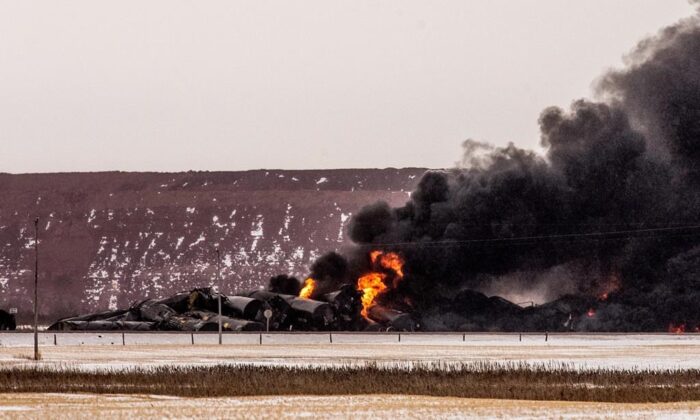 Garneau says the move is the result of close collaboration between government officials and rail companies to determine the reasons for derailments such as the one near Guernsey, Sask., and address the areas of greatest concern.

The Feb. 6 derailment was the second since December and forced some residents in the agricultural community to be evacuated.

The new rules announced by Garneau raise the permissible speed for trains pulling even one car with chemicals that are toxic when inhaled or more than 20 cars loaded with dangerous goods such as oil, liquefied natural gas or ethanol.

They take a harder line, however, on what the government considers higher-risk trains, setting lower speed limits for trains hauling nothing but dangerous goods or that include 80 or more tank cars of dangerous goods amid bigger loads.

“The safety of Canadians is a top priority for myself and the Government of Canada. The series of derailments like the one that occurred in Guernsey, Saskatchewan, and the impacts of these accidents are concerning,” Garneau said in a statement.

“It is for this reason that I put immediate speed restrictions to reduce the risk of derailments until more permanent measures are put into place to address this situation. A safe and efficient railway system is critical to the well-being of our country and its citizens.”

Garneau says the new speed rules will remain in effect until April 1 as the federal government works with railways to develop new safety measures, which will include dealing with track maintenance and winter operations.