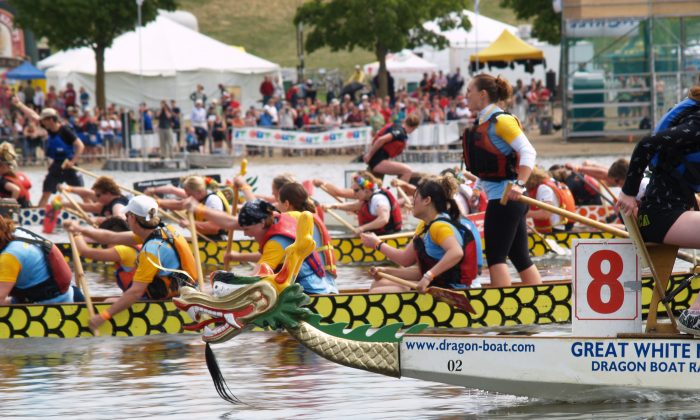 The whole party is free, including a concert chalk full of rock and roll, stunt guys flying through the air with mechanical prowess, magic and more for the kids, and you get to feel good just for showing up. That’s because you literally pay in cheers, though you’ll need cash for beers.

Sam Roberts Band will headline the free live concert on Friday night, setting the stage for a steady stream of solid Canadian talent. Fellow Juno award-winning alternative rock band Sloan will close the weekend on Sunday, along with Raine Maida, going solo from his band Our Lady Peace.

The festival’s longest concert lineup will start at 12:30 p.m. on Saturday, ending the night at 9:45 p.m. with indie rock band Born Ruffians and folk rock group Great Lake Swimmers. Everything in between will range from hip-hop to rock and even some jazzy-bluesy country, a lineup sure to provide a fun and energetic backdrop for all to enjoy the spirit of the festival.

For the Whole Family

The family fun will also include a wide range of entertainers who will amuse, awe, and inform. There will be a magician, ventriloquist, an illusionist, puppets that paddle, reptiles for petting, birds of prey set to fly, and circus stunts sure to astound.

And, of course, the fun would not be complete without you and the kids getting your faces painted and going for a bounce in the castle after you have learned to make your own drum for beating.

On the weekend you will witness one of the largest and most popular extreme sports stunt shows in the world. Off the two ramps and box jump, the ever-popular Craz-E-Crew Stunt Team will perform soaring backflips, superman airs, tailwhips, and many other tricks you shouldn’t try at home.

Then you can catch the bicycle stunt show by the amazing gravity-defying Chris Clark, who started his stunt cycling career at the age of 15. Ten years later he has become one of the masters at maneuvering his bike and body over custom-built ramps and obstacles, all the while sharing with the audience his understanding about why living a drug-free lifestyle is necessary to reach your full potential.

Again this year, and maybe even a little more so to mark the 20th anniversary, organizers have gone all out to encourage locals to come and enjoy the festivities while showing their support for the estimated 200 teams and nearly 5,000 racers paddling for worthy causes.

Since 1998, with contributions from donors and racers, the Tim Horton’s Dragon Boat Festival has raised more than $2.5 million for a number of local charities. The entertainment and activities are all free. The only thing they ask, although not directly, is that you come and cheer on the paddlers to help inspire them as they race to the finish line, and even better yet, to return again next year.

So come and do good by supporting some do-gooders. And be rewarded with world-class music, amusement attractions, extreme sports shows, tasty culinary treats, a beach side bar, a children’s area, and non-stop racing. It’s the good kind of conscience-clearing fun we all wish we could partake in a little more of I am sure.

The Epoch Times is a proud Sponsor of the Tim Horton’s Ottawa Dragon Boat Festival.