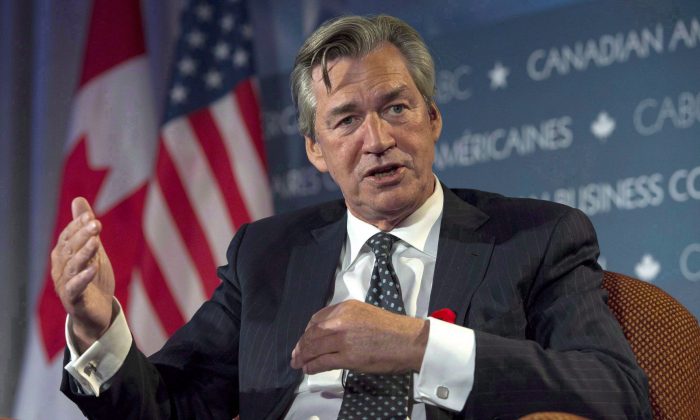 Canadian ambassador to the U.S. Gary Doer speaks at a business conference in Ottawa Nov. 6, 2014. Ottawa has fired off a pre-emptive strike ahead of a U.S. Senate committee hearing next week in which Canada's Syria refugee policy will be on the hot seat. THE CANADIAN PRESS/Justin Tang
Canada

Ottawa Defends Its Refugee Screening in Letter to US Senators

WASHINGTON—Ottawa has fired off a pre-emptive strike before American lawmakers hold a hearing that will put Canada’s Syria refugee policy on the hot seat.

The government has sent a note to members of a powerful U.S. Senate committee that has scheduled a meeting next week titled, “Canada’s Fast-Track Refugee Plan: Unanswered Questions and Implications for U.S. National Security.”

The U.S. Senate homeland-security hearing is, for the Trudeau government, an unwanted flip-side to the praise it received from progressives and foreign media outlets last month when the prime minister personally greeted refugees at the airport.

This will be far less laudatory, judging from the list of witnesses invited to testify before the committee on Feb. 3: most have already publicly challenged Canada’s plan to quickly accept 25,000 refugees.

The Canadian embassy had also been invited to testify but declined, said ambassador Gary Doer, citing a long-standing practice of avoiding appearances in that partisan domestic political chamber.

Instead, Doer sent a note beforehand outlining nine security measures the Canadian government has taken—five specifically related to the Syrian refugee program, and four others involving regular border co-operation with the U.S.

They include the collection of biometric information from refugees; a zero-acceptance policy when doubts surface about any individual candidate; use of U.S. security databases; the prioritization of low-risk refugees like women and families; and the fact that the refugees would be non-citizens for years, and couldn’t travel to the U.S. without visas.

“Rest assured that no corners, including security screening, are being cut in order to achieve the government’s objectives,” Doer wrote in the letter.

“Rather, the government has devoted significant resources to this effort.”

Doer concluded the letter by addressing a long-standing canard that repeatedly surfaces about the 9-11 attacks, noting that the congressional committee that studied the catastrophe concluded none of the hijackers came from Canada.

We’re not naive enough to suggest that there’s not a lot of politics in this.
— Ambassador Gary Doer

In an interview Jan. 27, Doer added: “We want to deal with the facts. We’re not naive enough to suggest that there’s not a lot of politics in this.”

In the U.S., the refugees have become a political football in a campaign season where different Republican presidential candidates are proposing a Syrian refugee ban—led by Donald Trump, who has gone so far as to call for a total freeze on Muslims travelling to the U.S.

Of the witnesses invited to testify at the Republican-controlled committee, three are likely to express concern about Canada’s refugee approach.

A union representing border guards will argue that there aren’t enough border agents to guarantee that the country is protected from terrorist infiltrators.

“It is a source of concern,” said Shawn Moran of the National Border Patrol Council. “The nearest agent could be 100 miles away. By that point, you could easily cross into the U.S. from Canada.”

Another witness is David Harris, an Ottawa resident who worked for the Canadian Security Intelligence Service from 1988 to 1990, and now runs his own anti-terrorism research operation. Harris has publicly suggested letting in fewer immigrants as one way for Canada to guard against the threat.

American lawmakers will also hear about how vital the Canada-U.S. border is to the economy. The U.S. takes in about 76 percent of all Canadian exports, and border-tightening measures after the 9-11 attacks affected the flow of goods.

Opposition MPs in Ottawa are warning the government to handle the file carefully.

“I think this (U.S.) committee has been struck because there are legitimate concerns,” said Conservative MP and immigration critic Michelle Rempel.

“I think it’s incumbent on the Canadian government to assure our largest ally to the south that the screening processes we have put in place are adequate. … Not just for their purposes, but for assuring the Canadian public that all rigour and processes have been put in place.”

Since the Liberals took power in November, 12,425 Syrians have arrived in Canada. Officials remain confident there will be 25,000 Syrian refugees—the total aimed for by the Liberals—in the country by the end of next month.