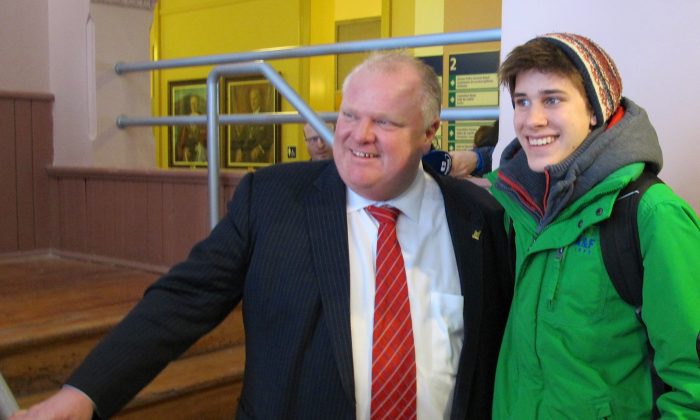 Toronto Mayor Rob Ford poses with one of his many fans who waited to have a picture taken with him during a break in the Big City Mayors’ Caucus held in Ottawa on Feb. 26, 2014. (Pam McLennan/Epoch Times)
Canada

When Ottawa City Council met on Feb. 26 its dense agenda was overshadowed by Toronto mayor Rob Ford’s attendance at the Big City Mayors’ Caucus held at City Hall on the same day.

There were plenty of media on hand, including some from other cities, to hear what Ford would contribute as he had not participated in any previous meetings by the group.

The caucus, held semi-annually, is composed of mayors from 22 of Canada’s largest cities. Members are part of the Federation of Canadian Municipalities, which represents nearly 2,000 municipal governments across the country.

Ford held a short press conference before the mayors’ meeting, during which he said, “I’m focusing on getting subway money for the city of Toronto, and trying to keep our postal services.”

Other mayors also want to retain door-to-door mail delivery, and a resolution will be sent to the federal government asking for a delay in the implementation of outdoor group mailboxes planned by Canada Post over the next five years.

Two other key items discussed include funding for improvements to aging transportation facilities and for a long-term housing plan to be included in the next federal budget that will offset affordable housing shortages the cities are experiencing.

When the caucus broke for lunch, a horde of media and fans were waiting in the halls to get pictures and quotes from Ford. He made time to have his picture taken with some young people who arrived with cellphones in hand to record the moment.

Meanwhile, city councillors, some wearing pink clothing representing anti-bullying sentiment, rolled through a heavy agenda with all motions carried. Only the proposed zoning by-law amendment to make it easier for suburban homeowners to widen their driveways prompted a lot of discussion.

The changes would allow suburban homeowners to widen their driveways to accommodate vehicle parking as long as it isn’t placed between the front of the dwelling and the road, and isn’t wider than 50 percent of the front yard.

The proposed amendment to the bylaw was carried in a vote of 14 for and 7 against.

Also, it was agreed that March 8 will be declared International Women’s Day in Ottawa.

Another motion carried was for council to urge Minister of Transportation Glen Murray to amend the Ontario Highway Traffic Act to permit the use of school bus stop-arm cameras that would identify and convict motorists who pass stopped school buses and increase the safety of children travelling on the buses.