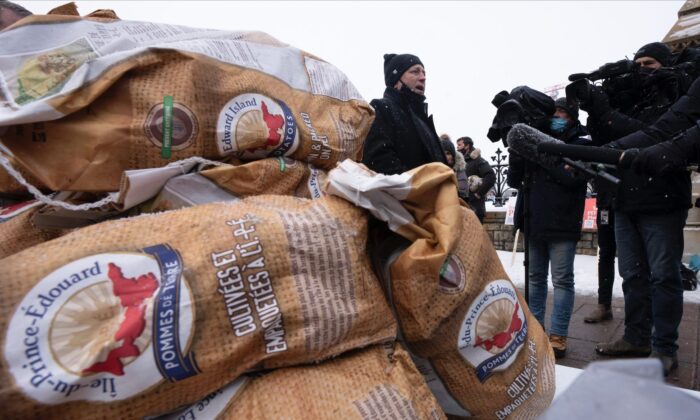 CHARLOTTETOWN—The federal government will spend $28 million to help Prince Edward Island farmers deal with a growing surplus of potatoes as an almost month-long export ban to the United States continues.

Agriculture Minister Marie-Claude Bibeau told a news conference on Monday the funding will be used to create more potato processing capacity in Canada and to ship some surplus to food aid organizations.

The money will also go toward helping farmers seek out new markets and allowing them to safely destroy their excess potatoes this winter.

“The fact is the U.S. will not accept shipments of fresh potatoes until they have the scientific reassurances they need,” Bibeau told reporters. She said that to assuage American concerns, an industry-government potato working group is developing a strengthened plant-health management plan.

Canada suspended all shipments of fresh potatoes from P.E.I. to the United States on Nov. 22 after the fungal potato wart was discovered in two fields in the province.

The United States potato market is worth about $120 million a year to P.E.I. Bibeau said a “significant quantity” of potatoes will need to be destroyed, but she did not specify how many.

P.E.I. premier Dennis King said the money announced Monday will be crucial in ensuring the potatoes slated for export won’t all go to waste. “These types of creative solutions are exactly what we need to do in the interim to move our excess potatoes until the U.S. market is reopened,” King said in a statement.

He also said the province is turning its attention toward ensuring the Canadian Food Inspection Agency can quickly gather the necessary soil samples to confirm potato wart won’t remain an issue for exports.

Bibeau said federal officials will be meeting with the P.E.I. Potato Board and other industry members this week to discuss how best to use the funding.