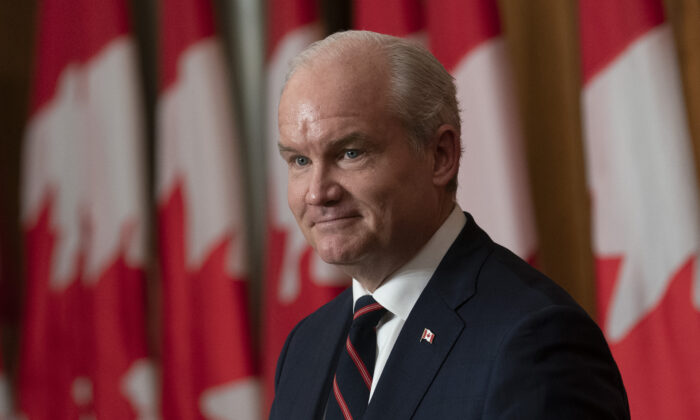 Conservative Leader and leader of the official opposition Erin O'Toole listens to a question from a reporter during a news conference following caucus in Ottawa on Oct. 5, 2021. (The Canadian Press/Adrian Wyld)
Canada

O’Toole Versus the Grassroots: Conservative Leader Finds Himself Divided From Base

OTTAWA—Erin O’Toole insists the Conservative caucus is united behind his leadership.

But can he be as confident about the party’s grassroots?

The reaction from a handful of third-party organizations, which represent swaths of the Conservative faithful, suggests the answer is likely a no.

“If they keep throwing their base under the bus, there’s not going to be anyone on the bus,” said Sheldon Clare, president and CEO of the National Firearms Association, adding that he remains a Conservative member for “right now.”

Gun owners and their advocates were among those O’Toole courted both times he ran for party leadership, first in 2017 and again last year, when he was successful.

Clare says the community reacted with shock, anger and disgust  during the September federal election campaign when O’Toole backtracked on his promise to repeal the Liberals’ ban on some 1,500 types of “assault-style” firearms. Facing attacks from the Liberals, O’Toole announced he’d subject the matter to a review—even inserting a footnote into the online version of his platform.

Clare says unhappiness among supporters and gun owners has intensified since the election, given that no further explanation or clarification has been provided about “a solid policy statement that became flipped, almost on a whim.”

“I’ve heard endless concern about the direction of the Conservative Party,” echoed Rod Giltaca, CEO and executive director of the Canadian Coalition for Firearm Rights.

“Whether it’s a viable option for gun owners and other people that believe in property rights or basic human rights.”

What path the Conservatives decide to tread next as Prime Minister Justin Trudeau enters his third mandate is at the heart of a new campaign launched by the National Citizens Coalition (NCC), a group once led by a young Stephen Harper, before his time as Conservative leader and later prime minister.

The campaign emphasizes the need to get back to promoting “conservative values,” such as freedom and less government.

“If you’re going to be Liberal-lite, people are going to vote for the real Liberals,” said NCC President Peter Coleman.

Other critics have pointed to O’Toole’s embrace of carbon pricing and his plan to continue running up massive deficits for a decade as examples of the leader departing from Conservative orthodoxy.

The critics included a member of the party’s national council, who was suspended by colleagues after spearheading an online petition for O’Toole to be recalled as party leader and for members to be able to vote on his leadership earlier than scheduled in 2023.

Some of the most vocally opposed to O’Toole come from the social conservative wing of the party, a well-organized group he made a concerted effort win over during the leadership campaign.

As part of that, he promised to legislate protection for health professionals who don’t want to refer patents for services they morally object to, like abortion or medical assistance in dying. Once the federal campaign hit and O’Toole faced questions around that pledge, he appeared to abandon the promise.

“From the feedback that we have received from our organization’s supporters regarding Mr. O’Toole’s leadership, it would not be an exaggeration to say that the extreme majority would be happy if there was a leadership race,” said Scott Hayward, co-founder of RightNow, a organization that works to elect anti-abortion candidates.

O’Toole has also drawn criticism over his shifting portrayal of himself.

First, he ran as the “true blue” candidate to win over party supporters. Then, once he became Conservative leader, he emphasized the need to be more moderate and progressive in order to win more seats in the crucial electoral battlegrounds of Ontario and Quebec.

How to balance the wants and beliefs of the party’s base—heavily concentrated in the Prairies, as is his caucus—with the need to  broaden the Conservatives’ appeal in Central Canada and to those who consider themselves moderates, has been the central challenge for O’Toole as leader.

O’Toole’s spokesperson denied there are any divisions in the ranks.

“Canada’s Conservatives are a united team,” wrote press secretary Josie Sabatino, adding they are focused on taking their fight to Parliament against “skyrocketing inflation, getting the economy back on track, and opposing Justin Trudeau’s censorship bills.”

“Conservatives are ready,” she said.

But Coleman observed O’Toole has been “remarkably quiet” since the campaign ended, adding the internal conflict over whether Conservatives support vaccine mandates, including for their own members of Parliament, has been a distraction.

Conservatives need to win seats in Ontario’s 905 region and appeal more to newcomer communities as they did under Harper, he said.

“They’ve been given no reason to vote Conservative.”

With a post-election review underway, the Tory leader has told supporters no one is more disappointed than him that they fell short in Ontario and sustained losses in ridings with large Chinese-Canadian populations.

Looking at the positives, he has boasted that Conservatives increased their vote share and picked up new seats in Atlantic Canada, which he contends proves things are headed in the right direction.

A majority of his caucus appears to want to keep O’Toole as leader. Even so, MPs voted to give themselves the power to review his leadership, which would only happen if 20 per cent of them signed a letter to force a vote.