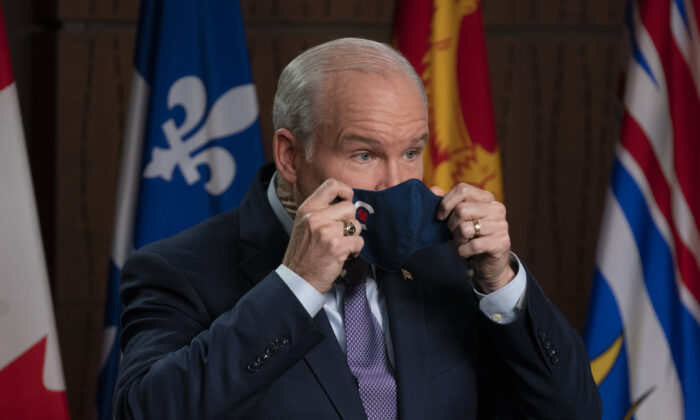 Conservative Leader Erin O'Toole puts on his mask as he steps up to the podium at a news conference on Parliament Hill, Oct. 27, 2021 in Ottawa. (The Canadian Press/Adrian Wyld)
Canada

Conservative Leader Erin O’Toole says his caucus will “respect and abide by” the new vaccine mandate set out by the House of Commons governing committee, while vowing to challenge the board that delivered the policy.

The House of Commons’ governing body announced a new rule on Oct. 19 that would ban members of parliament who aren’t fully vaccinated from entering the House of Commons precinct when the new parliamentary session resumes on Nov. 22, with exemptions only offered to those with valid medical reasons.

O’Toole said in a statement on Oct. 27 that he has put forth a plan in the Conservative caucus, which the caucus “agreed to respect and abide by new rules which require Parliamentarians attending in the House of Commons and Senate to be vaccinated.”

The Conservative leader also promised to raise “a question of privilege” in the House of Commons to “challenge the improper conduct and precedent” set by its governing body, the Board of Internal Economy (BOIE), saying that only “the House of Commons itself can determine its composition and conduct.”

Vaccine mandates appear to be a contentious issue among the Tories, as the party took a different stance on the issue previously.

“While we encourage everyone who can be vaccinated to get vaccinated, we cannot agree to seven MPs, meeting in secret, deciding which of the 338 MPs, just elected by Canadians, can enter the House of Commons to represent their constituents,” Richards said in a statement.

In an interview aired on Oct. 20, O’Toole told TVO’s Steve Paikin that his party will respect BOIE’s decision. On Oct. 22, O’Toole’s spokesperson said the Conservatives “do not accept that the BOIE has the jurisdiction to infringe on a Member’s right to take their seat in the House of Commons,” according to the National Post.

O’Toole also remains opposed to a hybrid Parliament, where MPs will participate in proceedings virtually. The Liberals and the NDP are in favour of continuing the hybrid sitting in the 44th Parliament, which has been the format for most MP meetings since the onset of the pandemic in March 2020.

The BOIE’s rule comes after the federal government announced on Oct. 6 that “core” federal public servants are required to confirm their vaccination status against COVID-19 by Oct. 29, or will be placed on leave without pay by Nov. 15.

In addition to the vaccine mandate, the BOIE also announced an extension of previously approved COVID-19 measures to Jan. 31, 2022, which include closing the House of Commons precinct to public tours and enforcing mandatory masking.