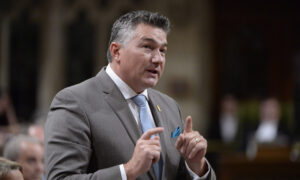 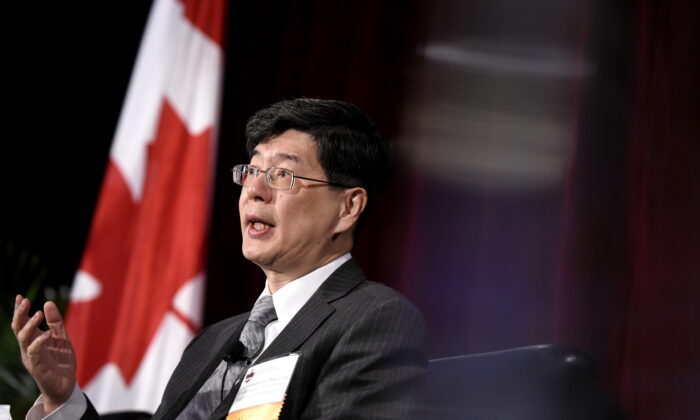 Ambassador of China to Canada Cong Peiwu speaks as part of a panel at the Ottawa Conference on Security and Defence in Ottawa on March 4, 2020. (The Canadian Press/Justin Tang)
Canada

Conservative Leader Erin O’Toole wants the Liberals to demand an apology from Chinese Ambassador Cong Peiwu for how he “publicly threatened” Canadians in Hong Kong and to withdraw Cong’s credentials.

“Last week the Chinese ambassador threatened 300,000 Canadians currently living in Hong Kong. He has offered no public apology and this government hasn’t demanded one,” O’Toole said in the House on Oct. 19.

“This morning, we learned that the Chinese government has actually doubled down and are complaining about our reaction to their threat.”

O’Toole said Cong issued another “vague threat” related to whether Parliament “dares to condemn the ethnic cleansing against Muslim Uyghurs in western China.”

“Who else has to be threatened by the Ambassador before the prime minister is willing to pull his credentials?”

In her response, Deputy Prime Minister Chrystia Freeland agreed that the “comments by the Chinese Ambassador Cong Peiwu are not in any way in keeping with the spirit of appropriate diplomatic relations between two countries.”

Freeland reassured Canadians in Hong Kong “that a Canadian is a Canadian and we will stand with them.”

On Oct. 15, Cong warned Canada against granting asylum to Hong Kong residents fleeing the city due to the national security law imposed by Beijing, saying it would amount to “interference in China’s domestic affairs and certainly it will embolden those violent criminals.”

“So if the Canadian side really cares about the stability and the prosperity in Hong Kong, and really cares about the good health and safety of those 300,000 Canadian passport holders in Hong Kong, and the large number of Canadian companies operating in Hong Kong SAR, you should support those efforts to fight violent crimes,” he said in a video press conference from the Chinese Embassy marking the 50th anniversary of diplomatic ties between Canada and China.

Asked if his remarks amounted to a threat, Cong replied, “That is your interpretation.”

O’Toole said Cong’s words were “of the kind of tone and tenor one would expect from someone seeking protection money—not someone who is the official emissary of a member of the United Nations Security Council.”

Canada has granted asylum to at least two pro-democracy activists fleeing Hong Kong since Beijing implemented a new national-security law in Hong Kong in June, which allows the regime’s law enforcement to exercise jurisdiction over the city, eroding its autonomy.