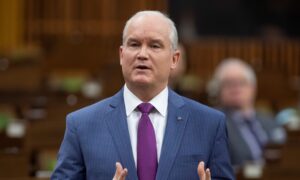 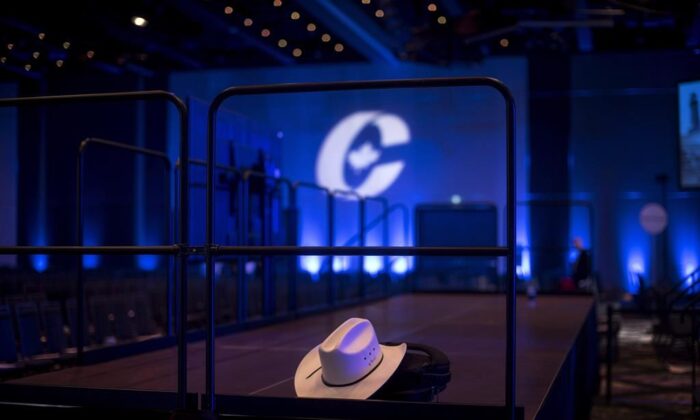 A cowboy hat is left inside an empty ballroom at the Conservative national convention in Halifax on Aug. 25, 2018. (Darren Calabrese/The Canadian Press)
Canada

OTTAWA—Conservative Leader Erin O’Toole unveiled elements of his election pitch to Canadians Friday, seeking to ease his party’s jitters that they’re without an offering solid enough to woo voters away from the Trudeau Liberals.

His marquee speech to the party’s policy convention contained what he billed as a “recovery plan” that would within one year restore one million jobs lost to the COVID−19 pandemic.

At the same time, a Conservative government would tackle some of the other weaknesses the pandemic has exposed or created in society, O’Toole promised.

The Tories would increase mental health funding to the provinces and beef up domestic production of pharmaceuticals and vaccines, all while winding down existing stimulus programs and getting the country set on a course to eliminate the deficit within a decade.

“Together, we will give Justin Trudeau the fight of his life,” O’Toole said, according to a prepared text of his remarks.

O’Toole’s one million jobs plan mimics a similar promise made by Prime Minister Justin Trudeau last fall, when the Liberals pledged to create that same number of jobs.

The Liberals have since been rolling out program spending they say is designed to do it.

O’Toole suggested his plan would be spurred on by incentives for small business and by assisting the hardest−hit sectors of the economy, as well as the women and young people who have suffered the most.

O’Toole, who was elected leader last August on the strength of a promise to stay close to the party’s conservative roots, sought again Friday to reach out beyond that faction.

He reiterated his campaign victory speech that his party will be one where all Canadians can find a home, and especially union members disenchanted by the New Democrats.

The NDP scoffed at the idea, pointing out that the previous Conservative government, which included O’Toole, was no friend of the unions, having voted for bills that made it harder for people to join unions and protected corporations, and was opposed to raising minimum wages.

“When it comes to having the backs of working people, just like Justin Trudeau, Mr. O’Toole says a lot of nice things, but he has fought against the needs of working people every step of the way,” the party said in a statement.

O’Toole also made a direct play to potential voters in Quebec, reiterating that only the Conservative party can advance their interests in Ottawa, not the Bloc Québécois.

It’s also time for the party to get serious on climate change, O’Toole said.

“We have now fought and lost two elections against a carbon tax because voters did not think we were serious about addressing climate change,” he said.

“And I will not allow 338 candidates to defend against the lie from the Liberals that we are a party of climate change deniers.”

With most research saying some element of carbon pricing is essential to help Canada hit its emissions−reductions targets—without spending a small fortune to do it—there have been questions about how or whether the Conservatives would stick by their promise to axe it.

On Friday, O’Toole reiterated his party would scrap part of it, but not the whole thing.

“We will scrap Justin Trudeau’s carbon tax on working Canadians,” he said.

What will replace it is in the works. Party members did debate several resolutions Friday on the issue, including one that would enshrine the fact their party believes that climate change is real.

The Liberals suggested not much will change for the Tories.

“As the Conservative convention debated whether climate change is real, Mr. O’Toole himself confirmed in his speech that he’ll do nothing and continues to oppose putting a price on pollution,” said MP Pam Damoff in a statement.

“While Mr. O’Toole has no plan to invest in the middle class and wants to ’take Canada back,’ Liberals are focused on helping Canadians through this global pandemic and doing everything it takes to keep Canadians safe, healthy, and supported.”

The convention gathering is held roughly every two years, meaning the next one is likely to come well after the next election.

If O’Toole fails to win a majority government, he’d face a leadership review by the membership, which could end up launching a race to replace him.

On Friday, the party made a major change to how that contest would run.

Previously, all 338 ridings in the country were allocated 100 points, and how many points a leadership candidate receives is based on what percentage share of the overall vote they received in the riding.

But that’s been tweaked in favour of a system that will see each riding allocated 100 points or one point per vote cast, whichever is less. So, if there are only 40 votes cast from a riding, there would only be 40 points up for grabs.

MP Garnett Genuis, who had proposed the change, said ridings with small memberships can’t be allowed to have an outsized influence on the race.

The goal of the change, he said, was to ensure leadership candidates get out and hustle to grow the party.

The point system was an issue of contention when the Conservative party was formed in a merger of the Progressive Conservatives and Canadian Alliance, and has been fought over at nearly every convention.

It was implemented instead of a one−member, one−vote approach as a way to ensure leadership candidates didn’t just focus on areas with strong membership numbers but got support across the country.

Leading the charge on the points approach was the leader of the PC party at the time, Peter MacKay.

He ran against O’Toole last year and lost.