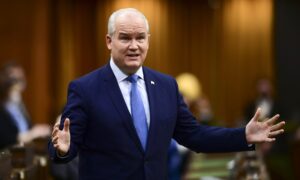 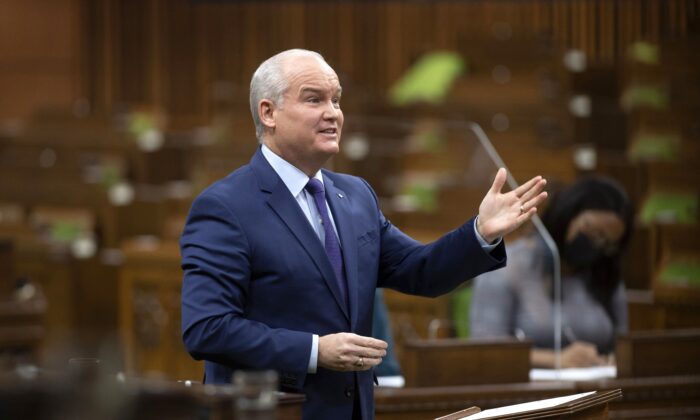 Conservative Leader Erin O'Toole rises during question period in the House of Commons on Feb. 2, 2021. (The Canadian Press/Adrian Wyld)
Viewpoints

As if suffering under the worst pandemic crisis seen in generations wasn’t enough, it’s becoming a foregone conclusion that Canadians will also have to endure a federal election in 2021.

As recently proven in British Columbia and Saskatchewan, elections during the pandemic serve the party in power well. The Trudeau Liberals see a path to the majority government that they so desperately crave, and Conservative Leader Erin O’Toole’s insipid strategy will ensure that the Liberals get their wish.

There has to be a clear distinction between the Liberals and Conservatives in order to coax voters into embracing a change in government. People need to see a path to positive change if they are going to take the leap and vote for it. If all the Conservatives have to offer voters is a set of the same policies but under a new face, they will vote for the familiar face.

Since becoming the leader of the Conservative Party of Canada (CPC) last year, O’Toole has steadily been backing away from the core conservative principles that he campaigned on during the leadership race as he hopes to gain the support of left-leaning voters in central Canada.

Last fall, O’Toole tore a page out of the NDP’s handbook and went on a tirade about wealth inequality in Canada. He then bemoaned the decline of private-sector union membership. This odd diatribe likely didn’t gain a single potential vote from NDP supporters, but it sent chills down the spines of struggling business owners in Canada. Economic recovery from pandemic restrictions for businesses right now looks tough enough as it is—the last thing they need is a deep injection of organized labour. If the CPC doesn’t have the backs of Canadian businesses, who does?

O’Toole then took aim at the social conservative base of the CPC when he targeted MP and former leadership contender Derek Sloan. The purging of Sloan from the party caucus was ugly and ham-handed, as a small donation from an obscure extremist was used as grounds for ejection. This move will not prevent the inevitable campaign accusations of bigotry and so on that will be levelled at the CPC by the Liberals and NDP during the election. The cancelling of Sloan will, however, cause thousands of dedicated social conservative supporters to close their chequebooks and stay home during the next election.

Canada’s conservative heartland in the Prairies is feeling pretty abused. Despite years of self-flagellation as resource producers in the name of saving the world from climate change, the Keystone XL pipeline project was cancelled without hesitation by U.S. President Joe Biden, while Prime Minister Justin Trudeau’s reaction was to shrug his shoulders. O’Toole has pledged to somehow meet Trudeau’s already-unreasonable climate targets even faster than the Liberals say they will. What on earth does that mean for Canada’s energy sector?

If the CPC is going to be indistinguishable from the Liberals in policy, it has to at least stand out from them in attitude. Vigour and strong stances can capture voter interest and support. Finance critic Pierre Poilievre delivered that crucial energy and intensity, being a quick and relentless foil to the Liberals in Parliament. How did O’Toole react to this firebrand on the front bench of the opposition? He demoted him. Perhaps O’Toole was tired of being outshone by Poilievre, but the brand of bland that we will see without him will not attract Canadians seeking some strength and moxie from the CPC.

O’Toole’s strategy has failed to win new support from Canadians, but it is managing to decimate his support base in the party. Recent polling shows support levels for O’Toole’s leadership among existing CPC supporters at an appallingly low 63 percent. For a party leader who has only held the role for six months, this is an abysmally low approval rating. There’s no way the CPC will be able to carry out an effective election campaign if they can’t count on their core supporters for contributions and volunteer efforts. O’Toole is going to have to find a way to inspire his base and fast.

Pragmatism is understandable, but a complete abandonment of conservative principles is unforgivable.

How O’Toole will manage to capture the support of swing voters in Canada remains to be seen. One thing that can be said with certainty though is that he won’t manage to win by trying to out-liberal the Liberals. That strategy is simply paving the way for Trudeau to a majority government.

Cory Morgan is a columnist and business owner based in Calgary, Alberta.