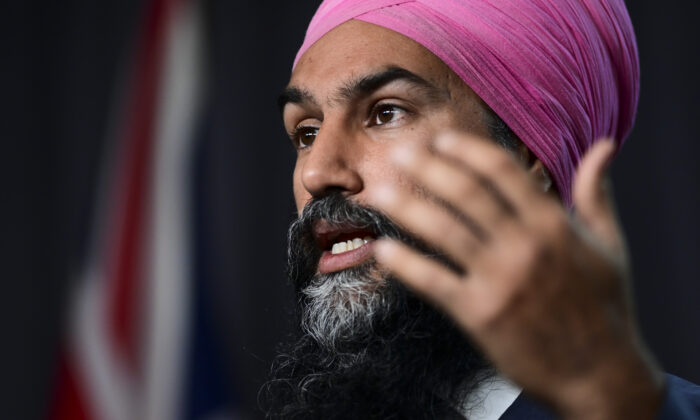 O’Toole and Singh Oppose Quebec’s Tax on the Unvaccinated

Conservative Party Leader Erin O’Toole and NDP Leader Jagmeet Singh said this week that they oppose Quebec’s planned financial penalty on those who are not vaccinated against COVID-19, citing the need to preserve the universality of the health-care system.

“Our health-care system is universal, it’s for everybody, and I think it’s unjust to target a small number of Canadians with such a measure,” O’Toole said at a press conference on Jan. 17 in Ottawa.

However, O’Toole said he respects the province’s prerogatives and he wouldn’t hold back federal health transfers to Quebec over the measure if he were prime minister.

The Conservative leader said that rather than resorting to such measures, encouragement and education should be key, “especially for vulnerable populations, for minorities, for indigenous communities.”

Quebec announced on Jan. 11 that it plans to impose a significant “health contribution” on the unvaccinated, who Premier François Legault blames for the province’s overflowing hospitals.

As of Jan. 17, Quebec data showed those who received one or two doses of vaccines count for 73 percent of hospitalizations in the last 28 days, if removing from the equation the 0- to 4-year-olds not eligible for vaccination. Quebec has a vaccination rate of 82 percent for those aged 5 and over.

During a virtual press conference on Jan. 18, Singh raised the specific issue of Canada’s health-care system being regularly under strain.

“Why are we in this position that our health-care system continually seems to be at the brink of collapsing?” asked Singh, who proposed as solutions increasing federal health transfers to provinces, recognizing the qualifications of internationally trained medical personnel, and fixing the long-term care system.

On Quebec’s planned tax on the unvaccinated, Singh said he would defend the universality of the system.

“We all contribute and pay taxes so that we can all have access to health care when we need it,” he said.

“This particular measure seems to be eroding the universality and that, to me as a New Democrat who believes firmly in a system that’s there for everyone when they need it, is something that I am concerned about.”

The NDP leader said the measure will have a disproportionate impact on those with lower income.

Prime Minister Justin Trudeau has not voiced opposition to Quebec’s planned measure, saying he needs more details on its application before taking a stance.

“I can say definitively we will not be proceeding with a similar measure,” said B.C.’s health minister Adrian Dix, reported CTV News.

“If we go down that road, we are completely rubbishing the whole principle of universality of health care, which is why Alberta absolutely will not follow the decision of Quebec,” said Alberta Premier Jason Kenney, reported The Canadian Press.