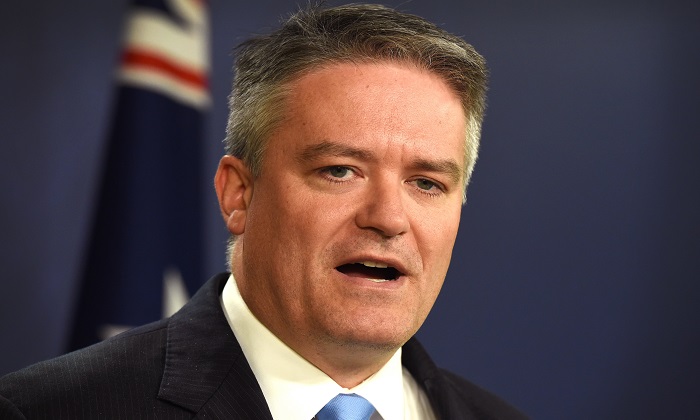 Australian Finance Minister Mathias Cormann has denied any wrong doing in receiving donations from the same wealthy Chinese businessman linked to opposition senator Sam Dastyari who resigned on Tuesday over his links to Beijing.

The donation was used for Cormann’s election campaign, reported the national broadcaster.

Speaking on the same day that Australian Labor Party (ALP) senator Dastyari resigned, Cormann said that he followed all legal requirements in relation to the donation.

“All of those donations are lawful and declared,” Cormann said, reported the ABC.

“As far as the Liberal Party donations are concerned they are lawfully received and declared consistent with our disclosure rules.”

Unlike the U.S. and many other nations, foreigners have been allowed to donate to a political party in Australia. Now the government is introducing new laws banning foreign financial donations as part of its foreign interference reforms.

According to an analysis by the Melbourne Law School Dollars and Democracy Database provided to The New Daily, political donations with links to mainland China represented 79.3 percent of all foreign donations in Australia. Between 2000-2016, Chinese nationals and entities donated over AU$12.6 million (US$9.5 million) to the Australian political process, the analysis said.

Cormann said he had met Huang who has been photographed with many Australian political leaders.

“I have met many Australians, including many people around Australia, including that particular gentleman,” he said.

Cormann insisted there was no evidence of the coalition — the Liberal Party and the Nationals who currently run government —  being influenced.

Liberal politicians, such as Social Services Minister Christian Porter, say the difference between them and Dastyari is how the money was used.

Porter told the ABC that Huang gave money to both sides of politics but he said Dastyari used money received to pay bills and expenses, not as a campaign donation.

“Money was forwarded from the businessman to Senator Dastyari to pay personal expenses … these were monies to pay legal bills and travel expenses,” Porter said.

“There will be both sides of politics who have received donations from the individual in question, but the essential issue with Senator Dastyari is that it wasn’t a donation, it was a personal gift.”

Huang’s company, Yuhu Group, disclosed donations to other Liberal Party figures last year, such as the electorates of Christopher Pyne and Michael Sukkar.

.@corybernardi: 'People give hundreds of thousands of dollars in political donations because they expect an outcome. There are question marks galore including how the government suddenly wanted to impose the China extradition treaty. It's fishy.' pic.twitter.com/yAHYpyAbTK

Last year, Dastyari first resigned from a frontbench position after it became known that he had a legal bill paid by Huang’s Yuhu Group. He also admitted he asked a Chinese government-linked group to pay a personal travel debt of AU$1,670 (US$1,280), reported the BBC.

There were several other controversies as well.

More recently, the media said the 34-year-old senator allegedly advised Huang that his phone was likely being tapped by intelligence services, including those of the U.S. government. Dastyari denied these claims first made in Fairfax.

Multiple reports followed over Dastyari’s further links with Huang and reports of acts in line with Beijing policy. Dastyari received negative press over a the content of a 2016 speech that he gave where he backed Beijing’s aggressive moves in the South China Sea went public. His comments, made while standing next to Huang, were the complete opposite of his party’s and the country’s stance on the issue.

More recently he reportedly pressured his own party’s foreign affairs spokeswoman, Tanya Plibersek, not to see a democracy activist in Hong Kong, reported Fairfax on Monday. Dastyari denied these claims as well.

During the briefings, the head of ASIO Duncan Lewis reportedly told party officials that the country’s security service was alarmed about Huang’s murky ties to the Chinese Communist Party (CCP).

On Tuesday, the ABC reported that Huang paid AU$55,000 (US$42,170) to have lunch with ALP leader Bill Shorten on October 5, 2015. The donation was made on Oct. 20 and the next day Shorten dropped his opposition to the China-Australia trade deal, reported the national broadcaster. Shorten has rejected the suggestion that Huang’s donation had any influence on his decision.

Former general secretary of the ALP Eric Roozendaal is now the chief executive of Huang’s Yuhu Group while former NSW deputy premier Andrew Stoner of the National Party was employed as a part-time adviser in 2015, reported Fairfax. When Roozendaal retired from politics in 2013, a friend of Huang’s, Ernest Wong, was catapulted into Roozendaal’s Upper House seat, reported the ABC.

Huang and the United Front

As for Huang, he is currently keeping a low profile. Last month he resigned as head of Australian Council for the Promotion of the Peaceful Reunification of China, a group which has several members contesting in local council elections, reported The Australian.

China experts say the Australian Council for the Promotion of the Peaceful Reunification of China is a part of the CCP’s “United Front” strategy of drawing in overseas Chinese to support its causes, reported the paper.

Steve Tsang, professor of Contemporary Chinese Studies at Nottingham University in the UK, described to The Australian how Beijing uses such organizations.

“There are ­organizations in many countries that like to present themselves as NGOs or independent institutions but work very closely with the Chinese authorities in order to promote certain policies or views of the Chinese government,” Tsang said.

“I think we have to recognize that the Chinese government still employs what the Communist Party calls one of its ‘magic weapons’, known as the United Front, effectively,” he said.

“This is a way of engaging with others to ensure they mostly support China’s position or at least be persuaded to be neutral about it.”

Think your friends may not know about this? Share it on Facebook and you will help keep them up to date and help us earn the ad revenue we need to keep reporting. Thank you very much!