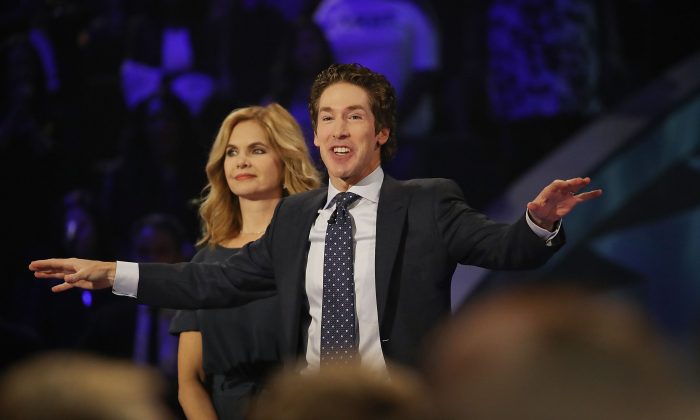 Joel Osteen, the pastor of Lakewood Church, stands with his wife, Victoria Osteen, as he conducts a service at his church as the city starts the process of rebuilding after severe flooding during Hurricane and Tropical Storm Harvey in Houston, Texas on Sept. 3, 2017. (Joe Raedle/Getty Images)
US

Joel Osteen, the head of the sprawling Lakewood Church in Houston, is denying claims that his church turned away Hurricane Harvey victims, saying that keeping its doors closed for several days was the “safe thing” to do.

“There [were] safety issues that people didn’t see. They see this building sitting up on a high hill, looks like a high hill, but behind the building is where the water comes in,” Osteen told Fox News in an interview on Sept. 3.

“And so our flood gates were keeping the water out until, I’m told, Sunday night or maybe even early Monday.”

He and a spokesperson for the church reiterated that the church isn’t a safe place to serve as a shelter because the first floor is underground and was flooded until last Monday. “We opened the building on Tuesday. I think that was the safe time to open it. I feel at peace about it,” Osteen told Fox.

“We asked our security staff, we asked everyone… we have not turned away anybody. So anybody was welcome and we did take people in,” Osteen was quoted as saying.

TMZ posted a video of a man showing that Osteen’s church’s doors were locked. Osteen’s spokesman, Donald Iloff Jr., told Fox News that he thinks the video is a “hit piece” as the video only shows one set of doors—out of 250 doors at the church.

“It could be somebody wanting to discredit us,” Osteen also said.


“Harvey came, but it didn’t take us out,” Osteen said, per the New York Daily News. “We are going to come out of this stronger than before.”

Osteen and his church received criticism on social media, which he also addressed. “There’s been so much misinformation about the church last week, I wanted to clarify a few things,” Osteen said as the crowd clapped.

“If we had opened the building earlier and someone was injured, or perhaps it flooded and people lost their lives, that would be a whole different story,” Osteen added. “I’m at peace with taking the heat for being precautious, but I don’t wanna take the heat for being foolish.”

Sunday’s services drew about 1,200 people, which is down significantly from the usual turnout of around 16,000, according to the Houston Chronicle.