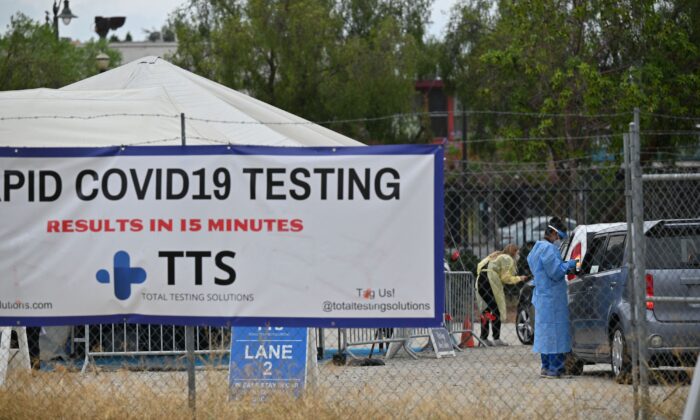 The Biden administration’s COVID-19 vaccine mandate for private businesses could be adjusted to remove the testing opt-out, according to the agency that crafted the requirement.

The Department of Labor’s Occupational Safety and Health Administration (OSHA) unveiled the emergency temporary standard this week. It mandates employers with 100 or more workers to require proof of COVID-19 vaccination. Any worker who does not must get tested for COVID-19 on a regular basis, at least weekly.

The standard took effect immediately but also serves as a proposed rule for a permanent standard, meaning that it may be altered.

Tucked into the 490-page standard is a section about how the public can submit comments on the proposed language. In it, the agency makes clear that the testing opt-out could be removed.

“Should OSHA impose a strict vaccination mandate (i.e., all employers required to implement mandatory vaccination policies as defined in this ETS) with no alternative compliance option?” the agency asked.

“OSHA seeks information on COVID-19 vaccination policies that employers have implemented to protect workers,” it added.

The Biden administration has used the existence of a testing opt-out to argue that the standard is not a mandate.

Critics said the mandate is a problem even if the testing opt-out is kept in place.

“OSHA’s ETS rule is a disaster even with the testing option. This is no longer about keeping Americans safe from a virus, it is about control,” Rep. Virginia Foxx (R-N.C.), the top Republican on the House Committee on Education and Labor, told The Epoch Times in an emailed statement.

“The Biden administration wants to perpetuate this pandemic so they can continue their once-in-a-century power grab. But we know that the American people won’t accept another one of President Biden’s dark winters or a permanent pandemic, they want the freedom to make their own health care decisions and work at their jobs without harassment from Biden’s bureaucrats,” she added.

A spokesperson for Rep. Elise Stefanik (R-N.Y.), the Republican Conference chairwoman, told The Epoch Times in an email that the congresswoman is against the standard and against the removal of the testing opt-out because it would remove flexibility.

Stefanik in a statement called the mandate “unconstitutional, unlawful, and an authoritarian power grab.”

“Biden’s vaccine mandate is tone deaf. The country is in a labor shortage, prices are skyrocketing, and supply lines are jammed, but this administration is instead focused on controlling businesses and imposing outrageous dictates on private companies. This mandate will only perpetuate the current crises our country is facing,” added Rep. Joe Wilson (R-S.C.).

The mandate quickly drew challenges in court and members of Congress have introduced legislation that would nullify it, including the Congressional Review Act from Rep. Fred Keller (R-Pa.) and the Justice for All Businesses Act from Rep. Madison Cawthorn (R-N.C.).

Biden administration officials assert the mandate is lawful under the Occupational Safety and Health Act.

“This is a power that Congress empowered OSHA with through a law that has been on the books for more than 50 years,” Karine Jean-Pierre, the White House’s top deputy press secretary, told reporters in Washington on Friday.