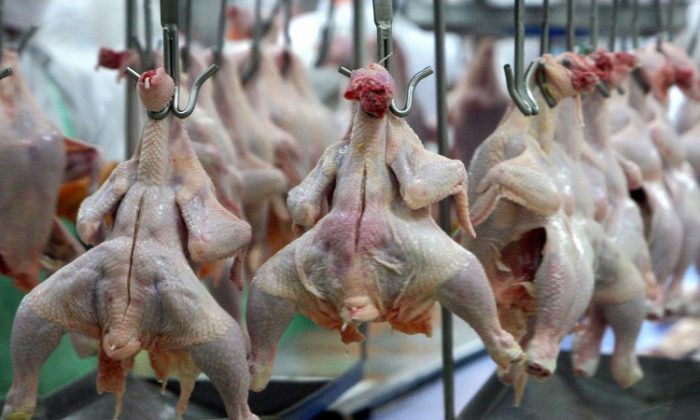 Chickens hang on a production line of a food processing plant seen here in this file photo. (SAEED KHAN/AFP/Getty Images)
US

U.F.S. faces $60,830 of total proposed fines. The manufacturer supplies deli-style salads, sandwiches, pastas, cream cheese, desserts, and prepared entrees for distributors and warehouses who then ship the products to schools, prisons, and grocery stores. Its products are labeled as Sally Sherman Foods.

There were seven repeated violations such as insufficient training and procedures for controlling hazardous energy sources, and a lack of machine guarding and fall protection. Similar violations were cited at the plant in 2009, 2010, and 2011.

U.F.S. was also issued two serious citations where death or serious physical harm were likely to occur: an uncapped carbon dioxide cylinder and the use of a receptacle not designed for wet locations.

Sally Sherman Foods has confirmed that its president, plant controller, as well as other executives are no longer with the company.

Thomas Recine, the plant’s new vice president as of the last week of October, said that the plant has spent $49,000 spent on the necessary repairs and that the safety standards have been met. “We have inherited a mess… but safety is paramount to us,” he said.