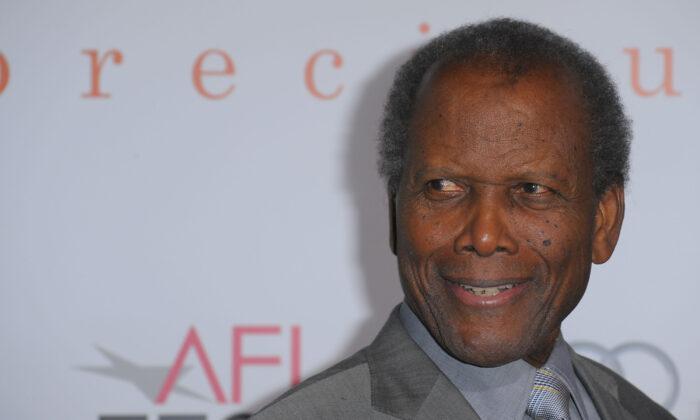 Sidney Poitier arrives at the AFI FEST 2009 Screening Of Precious: Based On The Novel 'PUSH' By Sapphire in Hollywood, Calif., on Nov. 1, 2009. (Jason Merritt/Getty Images)
Entertainment News

Sidney Poitier, who became the first black actor to win an Academy Award for best lead performance and the first to be a top box-office draw, has died. He was 94.

Poitier, winner of the best actor Oscar in 1964 for “Lilies of the Field,” died Thursday at his home in Los Angeles, according to Latrae Rahming, the director of communications for the Prime Minister of Bahamas. His close friend and great contemporary Harry Belafonte issued a statement Friday, remembering their extraordinary times together.

“For over 80 years, Sidney and I laughed, cried, and made as much mischief as we could,” he wrote. “He was truly my brother and partner in trying to make this world a little better. He certainly made mine a whole lot better.”

Theater owners named Poitier the No. 1 star of 1967. In 2009, President Barack Obama awarded him the Presidential Medal of Freedom.

Poitier received numerous honorary prizes, including a lifetime achievement award from the American Film Institute and a special Academy Award in 2002.

Poitier had four daughters with his first wife, Juanita Hardy, and two with his second wife, actress Joanna Shimkus, who starred with him in his 1969 film “The Lost Man.” Daughter Sydney Tamaii Poitier appeared on such television series as “Veronica Mars” and “Mr. Knight.” Daughter Gina Poitier-Gouraige died in 2018.

“He is our guiding light who lit up our lives with infinite love and wonder. His smile was healing, his hugs the warmest refuge, and his laughter was infectious. We could always turn to him for wisdom and solace and his absence feels like a giant hole in our family and our hearts,” his family said in a statement. “Although he is no longer here with us in this realm, his beautiful soul will continue to guide and inspire us.”