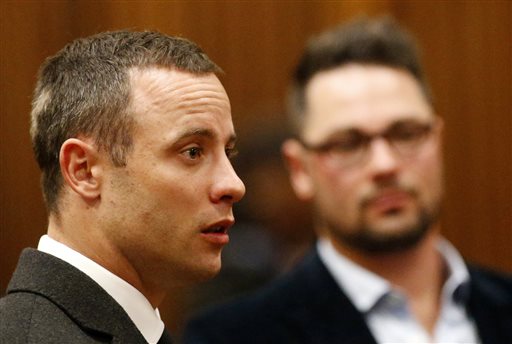 Oscar Pistorius, listens as a court ruling is handed down that he would undergo psychiatric evaluation in Pretoria, South Africa, Tuesday, May 20, 2014. Pistorius is charged with the shooting death of his girlfriend Reeva Steenkamp on Valentine's Day in 2013. At back right is brother Carl Pistorius. (AP Photo/Siphiwe Sibeko, Pool)
Africa

Oscar Pistorius Trial: What Are Doctors Looking for in his General Anxiety Evaluation?

Judge Thokozile Masipa ordered a 30-day evaluation of Pistorius after the diagnosis.

Pistorius is finishing up his second week of being evaluated.

Dr. Charles Sophy told HLNTV that doctors should be able to tell by now whether Pistorius has the disorder or not.

“Most of the traits that exhibit themselves for a generalized anxiety disorder will come out in things that not only will be tested for in psychological testing, such as concentration, pulse control, mood, those kinds of things,” he said.

“They’re also going to be looking at things like his sleep.And is it good sleep, is it continuous sleep, does he have an issue with his sleep? His eating, his energy level.”

“The kinds of things that go through his head–is he able to be productive, or s the anxiety to a level that it almost paralyzes him through the day. There’s definitely clear criteria,” he added.

Pistorius is being treated as an outpatient at Weskoppies Psychiatric Hospital in Pretoria, with the ability to go home at the end of each day. A panel of four experts will observe Pistorius and compile a report for the court.

Pistorius, 27, claims he shot Reeva Steenkamp, 29, by mistake through a toilet stall door in the pre-dawn hours of Feb. 14, 2013, thinking she was an intruder. The prosecution says he murdered her during an argument. A psychiatrist called by Pistorius’ defense lawyers recently testified she believes the runner had an anxiety disorder from childhood which may have contributed to him killing Steenkamp. That prompted the chief prosecutor to ask the court that he be sent for independent psychiatric tests.

Kelly Phelps, a senior lecturer in the public law department at the University of Cape Town and a legal expert observing the trial, said the psychiatric evaluation could affect both the verdict and, if Pistorius is convicted, the sentencing. She saw three possible outcomes:

— An “extreme” conclusion in which the panel decides Pistorius was unable to distinguish between right and wrong, or act in accordance with that understanding, because of an anxiety disorder when he killed Steenkamp. Such an outcome, according to Phelps, would result in a verdict of “not guilty by reason of mental illness.”

— The panel basically agrees with the defense witness, Dr. Merryll Vorster, who said Pistorius was able to distinguish between right and wrong but had the anxiety disorder, possibly bolstering Pistorius’ argument that he was acting in “putative self-defense” because he feared his life was in danger from a perceived intruder.

— The panel contradicts Vorster and says Pistorius does not have an anxiety disorder, possibly casting doubt on the defense’s argument that Pistorius had a long-held fear of crime and felt anxious and vulnerable when he shot Steenkamp.

Judge Masipa said that the panel should determine whether any mental illness may have affectedPistorius’ capacity to be “criminally responsible” for killing Steenkamp. She said the panel would evaluate “whether he was capable of appreciating the wrongfulness of his act or of acting in accordance with an appreciation of the wrongfulness of his act.”

The world-famous disabled athlete faces 25 years to life in prison if found guilty on the premeditated murder charge. He is free on bail.

Masipa’s ruling came on day 33 of proceedings in the trial, which started March 3 and was initially predicted to last three weeks.