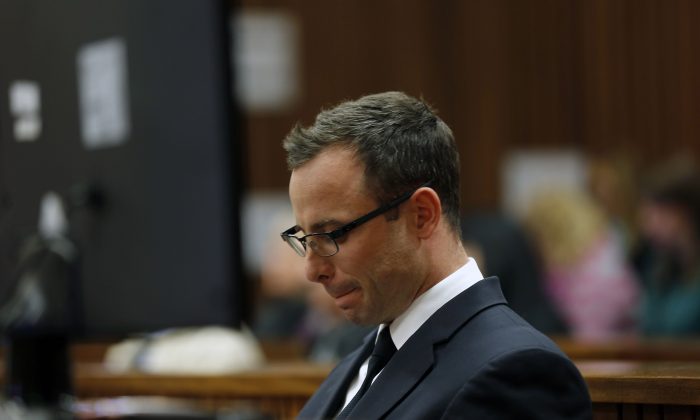 The Oscar Pistorius trial is almost over with the verdict set to come next week.

South Africa doesn’t have jury trials, so it’s up to Judge Thokozile Masipa, who will render her verdict on September 11

It turns out, even if Pistorius is found guilty of a lesser murder charge than premeditated murder–which would land him at least 25 years in prison–then he could avoid jail altogether.

Pistorius has admitted to killing his girlfriend Reeva Steenkamp, but has insisted that he mistook her for an intruder.

The circumstances lead to four possible outcomes for Masipa to choose from.

First, Masipa must decide whether Pistorius actually believed there was an intruder in the house. If she decides yes, then he’s guilty of culpable homicide.

If Masipa, on the other hand, decides that Pistorius is lying about believing there was an intruder in the home, then that means Pistorius is guilty of murder. The judge will have to decide whether it was premeditated, or, in other words, whether he planned it.

William Booth, a criminal lawyer based in Cape Town, notes that in the case of Masipa believing that Pistorius actually did think there was an intruder in the house, then the culpable homicide carries a sentence that is at the judge’s discretion, and there’s “a good chance he may not be imprisoned.”

Stephen Tuson, criminal law adjunct professor at the University of the Witwatersrand in Johannesburg, added to Macleans that Pistorius’ defense team laid the groundwork for an appeal, and also a mistrial.

Lawyer Barry Roux could appeal the verdict on the facts of the case, such as arguing witness evidence was accepted when it should not have been. He could also argue that the live broadcast of the trial constitutes a reviewable irregularity that denied Pistorius a fair trial, Tuson told the media outlet.

Roux hinted at that tactic earlier in the trial.

“We were unable to call a number of witnesses because they refused, and didn’t want their voices heard all over the world,” he said.

But Johannesburg-based lawyer Ulrich Roux said that witnesses actually enjoyed more protection becuase of the live broadcast of the trial. “We do a lot of high-profile cases that get reported on in newspapers. That’s exactly the same as it being broadcast on live television,” he said.

Among the other angles Roux could go for is saying that the live broadcast of the trial caused some of the witnesses to change their stories after watching the trial on television.

“I’m not saying anyone did this, but witnesses could tailor their evidence,” Tuson said, “and if that’s the finding of the court—that Pistorius did not get a fair trial—then it would just start again.”

In any case, the verdict will be coming in about a week, and the analysis will begin anew once the verdict is delivered.