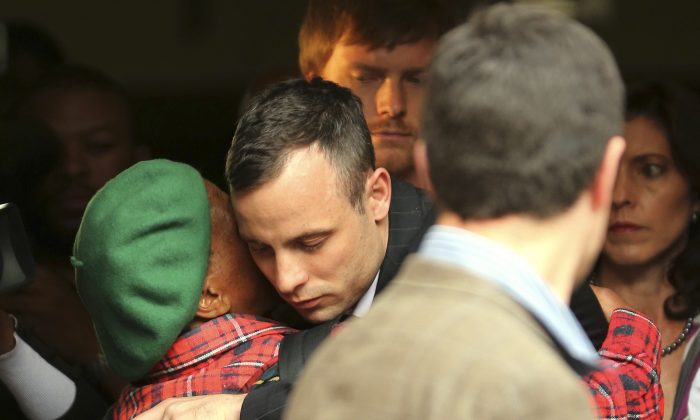 Oscar Pistorius, center, shares a hug with an unidentified woman as he leaves the high court in Pretoria, South Africa, Wednesday, April 16, 2014. Pistorius is charged with murder for the shooting death of his girlfriend, Reeva Steenkamp, on Valentines Day in 2013. (AP Photo/Themba Hadebe)
Africa

Oscar Pistorius Trial Set to Restart on May 5; Key Points the Judge Must Consider

The Oscar Pistorius trial is set to restart on May 5 after a break.

In South Africa, judges decide the verdicts as opposed to juries. That puts a lot of power into the hands of Judge Thokozile Masipa.

Pistorius is accused of murdering his deliberately on February 14, 2013. He says that he did shoot her but that he mistook her for an intruder.

That’s one of the key points that the judge must consider, reported the Daily Mirror. Pistorius says that he was falling asleep in the early morning when he asked her to bring both fans inside before she went to sleep.

He woke up and they were still running and the door was open, with Reeva asking him “Can’t you sleep my baba?” so he brought them inside. While he was doing this, he says, Reeva must have walked into the bathroom unnoticed by him.

He heard the bathroom window slide open and thought it was a burglar, prompting him to grab his gun.

Another key point is the loud noises heard coming from the home. One was gunshots, and the other was the sound of a cricket bat as he struck it against the door to break it down.

Pistorius says that the screaming heard before the noises was himself screaming.

But the prosecution alleges that it was Reeva screaming, and that there was an argument between the two before Pistorius shot at the door.

A third point is the state of the couple’s relationship.

Captain Francois Moller, an IT expert with the police, said that he examined thousands of text messages between the couple.

About 10 percent of them are relevant to the case, he said, pointing out that they signified Pistorius as a controlling and jealous boyfriend.

“I’m scared of you sometimes and how you snap at me and how you react to me,” Reeva tells Pistorius in one of the messages. “You have really dated a lot of people yet you get upset if I mention one boyfriend. I’ve been upset with you for 2 days.”