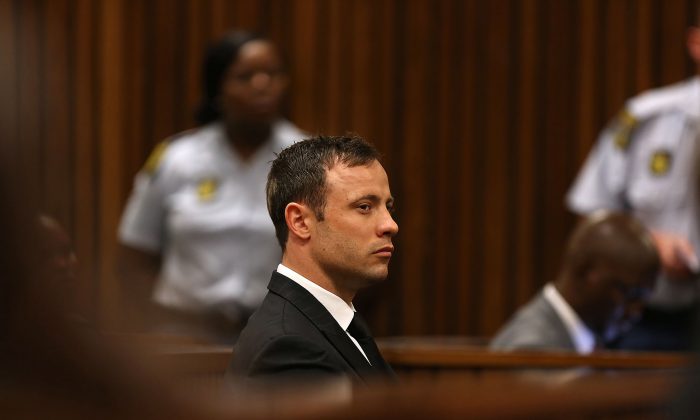 Oscar Pistorius looks ahead as he sits in court in Pretoria, South Africa, on Sept. 12, 2014. In passing judgement judge Thokozile Masipa ruled out a murder conviction for the double-amputee Olympian in the shooting death of his girlfriend, Reeva Steenkamp, but said he was negligent and convicted him of culpable homicide. (AP Photo/Alon Skuy)
Africa

Reeva Steenkamp’s parents have said there’s more to the Oscar Pistorius case. He was found guilty of culpable homicide in the death of his girlfriend a few weeks ago.

Parents Barry and June Steenkamp said the result was “not the right verdict,” according to The Week.

Pistorius has said he thought Steenkamp was an intruder when he opened fire last year, killing her.

“He could have gone to the balcony and shouted for help knowing that somebody was there. He could have pressed the alarm system [and] all this would have been prevented,” Barry said. “I feel that there’s still a missing link somewhere. I think there’s quite a bit more to the whole thing than has been produced so far.”

“We were shocked, shocked, disappointed. You know, your heart drops. You just want the truth and it’s going in the wrong direction, that’s how you feel,” she said, adding: “It is a horrible, horrible thing that we’ve been through, and it’s still going on.”

Meanwhile, the father of Pistorius said that he was too strict with his son in the past.

Henke Pistorius, 61, said he hasn’t really spoken much with his son in the past year, reported the Telegraph, citing a local publication in South Africa.

“We’ve said in various conversations and SMSes [text messages] we must get together and have a long talk,” Pistorius was quoted as saying. “Since the tragedy he hasn’t had a decent talk with me. He hasn’t yet talked to me from his heart. I know it’s going to happen. It’s going to happen soon and it will be good for both of us.”

In the interview, the elder Pistorius appeared to show remorse in how he raised his son.

“Perhaps I was sometimes too hard on Oscar. I was strict,” he said. “I think I could have spent more time with my children when they were small. But I had to work. I had to earn money.”

Pistorius will appear in court next month for sentencing.

“The time just after Oscar was born, when we realised he was different from other little kids, was harder for me,” his father added, referring to when his son was born without normal legs. “When I had to make decisions that could make or break his life.”