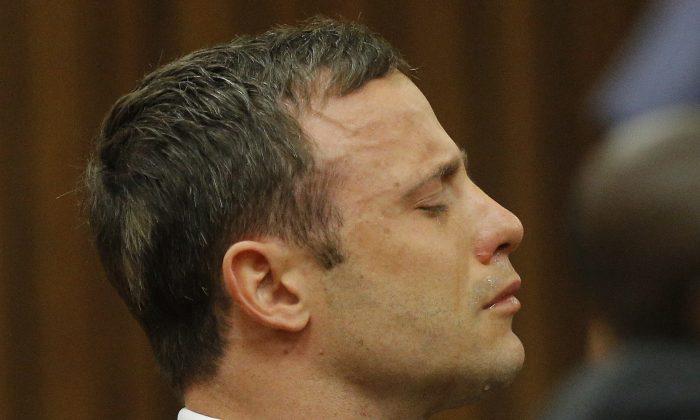 Oscar Pistorius reacts in the dock as Judge Thokozile Masipa delivers her verdict during his murder trial in Pretoria, South Africa, Thursday Sept. 11, 2014. Masipa ruled out a murder conviction for the double-amputee Olympian in the shooting death of his girlfriend, Reeva Steenkamp, but said he was negligent, raising the possibility he'll be convicted of culpable homicide. (AP Photo/Kim Ludbrook, Pool)
Africa

Oscar Pistorius has been found guilty of culpable homicide in the Reeva Steenkamp murder trial, and will be sentenced at a later date.

Reactions to the verdict, and the trial in general, has come from many quarters. One of the latest comes from a columnist who says that Pistorius has been a source of racial shame.

Jonny Steinberg of Business Day asserts that “feeling of vengeance” in the case “are much stronger among whites than blacks.”

“Pistorius has offended a sense of racial pride, and a lot of white people are hungry for his blood,” he claims.

“White people I’ve known for years, usually calm and thoughtful, grow red with anger when they talk about Pistorius.”

Steinberg points out that the public perception of Pistorius quickly changed–before he was a heroic model of hwo to be white in postapartheid South Africa, but he became “a paranoid, gun-toting man, his body pumped with testosterone, his 9-mil forever in reach” while noting that Judge Thokozile Masipa was put in an odd position, as a black judge, of handing down the verdict.

“And her job, in the eyes of many white people, at any rate, was to punish a white man for causing grief to his own kind. Isn’t it ironic, then, that what Masipa did instead was feel deep sympathy for Pistorius? While many white people looked at him and saw a monster, Masipa saw a legless man hobble fearfully through his house. So much sympathy did she feel that she bent the law as far as she might dare to protect him,” he said.

Indeed, Pistorius may get off without any jail time, though that won’t be known until the sentencing phase of the trial.

Steinberg argues that people aren’t really angry with Pistorius or Masipa. “It has to do with the difficulties of being white at the tip of the African continent,” he said.

Meanwhile, the Paralympics head says that he won’t promote Pistorius’ return to running at the world event, if it does end up happening.

In this Sunday, Aug. 5, 2014 file photo South Africa’s Oscar Pistorius starts in the men’s 400-meter semifinal during the athletics in the Olympic Stadium at the 2012 Summer Olympics, London. (AP Photo/Anja Niedringhaus, File)

Next month, the Masipa could hand Pistorius anything from a suspended sentence and a fine to as much as 15 years in prison. Should Pistorius subsequently be in a position to compete, the International Paralympic Committee would be powerless to stop “Blade Runner” returning to the track if he achieves a qualifying time.

“If that athlete was entered and had gained the qualification we would not be a legal situation where we could deny that athlete the right to compete,” IPC President Philip Craven said.

But he added: “There has never been any intention to promote any reinstatement of any sort.”

The Pistorius case has presented Craven with some of the most challenging moments of his 13-year tenure. For so long, Pistorius was the poster boy of the Paralympic movement, generating huge interest around the 2012 London Games when the South African known as the “Blade Runner” became the first double-amputee sprinter to compete at the Olympics.

But on Valentine’s Day in 2013, Pistorius opened fire in his home after hearing what he said sounded like an intruder in a bathroom in the middle of the night, killing his girlfriend, Reeva Steenkamp.

“I was in a state of shock for two days then we realized we had to come out of that rapidly,” Craven said. “Of course he was a great athlete but what took place 18 months ago was not anything to do with sport … but it’s an absolute tragedy.”

On Monday, the IPC marks the 25th anniversary of its formation, although the Paralympics first took place in 1960.

Craven said the movement is not reliant on the star power of one athlete.

Other sprint stars have emerged, such as Alan Oliveira, who upset Pistorius by winning the 200-meter race at the London Paralympics. The Brazilian will likely be competing in front of his home crowd when the games go to Rio de Janeiro in 2016.

Whether Pistorius will be competing there will become clearer next month.